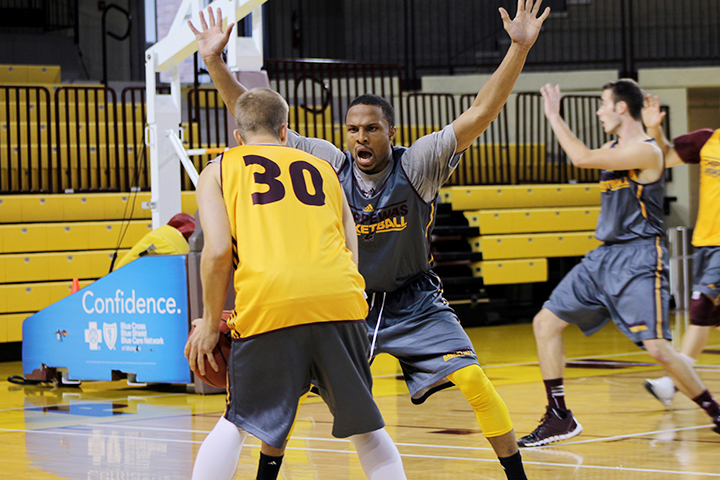 Central Michigan University’s men’s basketball team will look to improve on a lackluster performance last season when they tip off this season.

The Chippewas finished 10-21, with a 3-15 record in conference play, struggling to obtain wins on the road.

Last season’s team was very young and inexperienced, which caused a lot off issues for the team as the season wore on. A prominent issue for the team was a lack of size and strength inside, which hurt them on the defensive end and in the rebounding battle.

The Chippewas’ struggles on the defensive end can be attributed to a lack of an inside presence, only averaging 1.2 blocks per game as a team and 20.7 defensive rebounds a game.

Offensive rebounds and clean looks at the rim will cause problems for any team’s defensive efforts, which was a reoccurring problem last season.

Coach Keno Davis expects the additions of 6’10” freshman center Luke Meyer and 6’9” freshman forward DaRohn Scott, as well as 7’ redshirt freshman Milos Cabarkapapa will aid the Chippewas’ woes on the defensive end. Each of these players bring a lot of size and strength to the frontcourt, which is a huge improvement compared to last season.

Davis also knows the team is going to face some issues while giving these inexperienced players a lot of playing time.

Davis acknowledged the team’s struggles in the frontcourt, saying he had to play Blake Hibbitts and John Simons out of position at the center position.

According to Davis, the biggest improvement the team has made this season is the intensity of the players.

“It will be night and day from what people commended this team about how hard they worked,” Davis said.

Leaders of this team are guards Rayshawn Simmons and Chris Fowler. Simmons will have a much bigger role for the Chippewas this year. Davis said he expect Simmons to have more of a predominant role this year and plans to see growth in Fowler as well.

“Chris Fowler has been a blessing to this program, there’s nothing on the court that he can’t do,” Davis said.

The team’s success is heavily dependent on his performance, as he led the team in scoring, assists and steals. As Fowler goes, so do the Chippewas.

Coach Davis’ goal for the season is to continue to improve with a roster filled with players who are looking to grow. He feels as if there is not a team on the schedule that they cannot beat, which is an exciting feeling.

Expectations for this season are different for this team, because Davis doesn’t know what to expect game in and game out.

He is hopeful for a successful season, but is not sure how to define what that success will be yet.

The roster is filled with young, talented players. As this season goes on, the players will continue to grow as a team, becoming better as a unit.

Chippewas fans can expect to see an exciting group of players on the floor this year with hopes for success and a lot to cheer about.