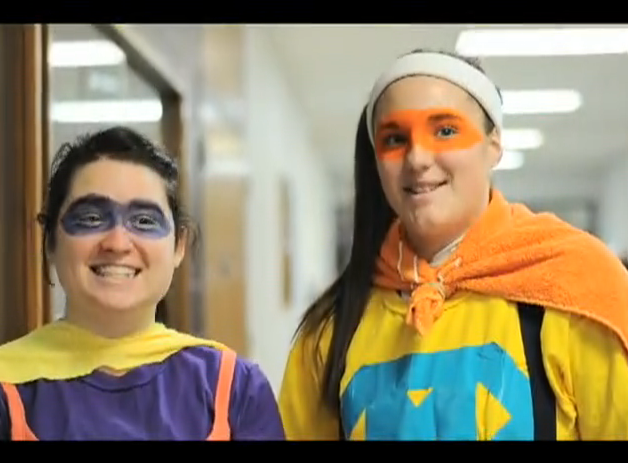 On a surprisingly sunny February day in Michigan a slew of people gather at Rose Pond on Central Michigan University’s campus for the 2011 Polar Plunge. Buzz light year, cave men, super heroes and Hogwarts’ students all showed up to the event in support of Michigan’s Special Olympics on February, 19.

The participants outfits would not stay pristine for long. Every last costumed-brave soul jumped into the depths of the 34 degree Fahrenheit Rose pond. The event, like many others held around the country, raises money to help fund Special Olympics events and athletes.

There is a minimum of a $50 donation to jump, however the average participant raises around $200, according to Joel Warner, coordinator for the Mount Pleasant Polar Plunge. Many groups participated in the event, like CMU’s Phi Sigma Pi fraternity whom together raised $4,600. Plungers took the leap in pairs, many coordinating their costumes together, like CMU student’s Paige Bruce and Morgan Roberts, who dressed in neon superhero gear. Although on Central Michigan University’s campus, it was not all crazy college students who took the plunge. Ages ranged from middle school students to polar plunge veterans. A few brave souls took the leap by themselves like Nate Jonaitis the third plunger of the day, raised $6,000. A fifth-year jumper he was dressed as a giant Fourth or July Popsicle.

Eugene Comstock, a Special Olympic track and field, field hockey, bowling, boccie ball and golf athlete, was the only athlete to take part in the polar plunge. Before his plunge, Comstock explained that he didn’t tell anyone he was plunging, jokingly he said “I hope my doctor isn’t here to see this.” As the first plunger, he dipped his feet into the 34 degree Fahrenheit water as the crowd cheered him on, opening the event for the costumed plungers to take their leap.

Dean Moore helped Comstock raise a significant amount of money by taking him on a tour of the Delfield Co. factory where Moore works. On the day of the plunge Comstock had raised $900, just shy of the $1,000 needed for Comstock to be awarded a special jacket for those who raise a grand or more. By mid-morning Comstock had reaches his fund-raising goal, bringing in $1,050 for Michigan’s Special Olympics.

Mike Whitney, a second time jumper, asked his employees at HHA at the Masonic Temple in Alma, Mi to take the plunge along side him this year. Only two brave girls agreed to take the plunge, Brenda Smith and Melanie Sparks. Smith and Sparks created their ballerina costumes for the plunge, including a pink wig for Whitney to wear. “I drew the limit right here though” pointing to his beard, “they wanted that gone, ehh no.”

“It’s a good cause, people don’t realize how expensive it is to participate in an event like this,” said Whitney about the Special Olympics. His cousin is an athlete who normally attends the polar plunge with him but was playing in an away basketball game on the day of the plunge.

140 people participated in this year’s polar plunge at Rose Pond. 2009′s polar plunge $30,000. Warner said that every year the event grows a “good 75%”. This year’s goals was to raise $40,000. There are 24 different polar plunges in across Michigan this winter. Central Michigan University is the headquarters for Michigan’s Special Olympics. CMU will hopefully place second or third in money raised for the Special Olympics athletes.

The frigid water has been explained as a sharp feeling of pins and needles all over your body. “Come on, it ain’t bad… okay i lied a little bit,” laughed Whitney as he, smith and sparks ran inside to the Student Activity Center for warmth.

After the jump, plungers were handed donated towels to dry off with and hot coco from local business supporters, Biggby Coffee. Plungers hit the lockers to shower and change into dry and warm clothing. Afterwords, O’Kellys Bar and Grill, 2000 South Mission Street, hosted the after party for plungers and attendees. non-plungers were asked to make a $5 donation to eat the 2011 polar plunge lunch.