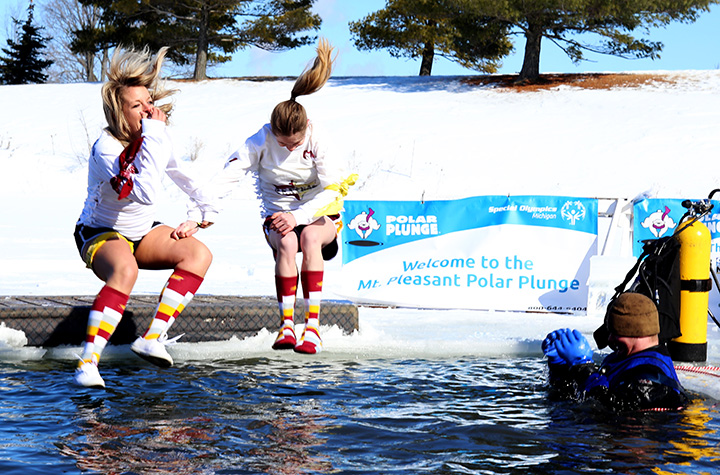 Plungers donned costumes, greek letters, Central Michigan athletics jerseys and swim trunks for their jump into freezing water. Some knew what to expect from participation in past polar plunges, but many more were first time jumpers. All jumped in support of Central Michigan’s Special Olympics.

No matter the experience, the line of plungers screamed in excitement as they stepped closer and closer to the square cut out of Rose Ponds. Their friends shouted words of encouragement to remind the uncertain that it was for a good cause.

Mount Pleasant resident Paula Rooter jumped with her friends in support of her daughter.

“My daughter is an athlete in the games,” Rooter said. “This is all for her.”

Though it was Rooter’s first time, she wasn’t alone. With four other friends, they collectively dressed as Detroit Lions tailgaters.

Rooter had a goal of raising $500 in pledges before the event. She had reached her goal the morning of the event, but people continued to donate.

Though the line of plungers reached from the entrance of Rose arena around to the women’s locker rooms. Just as many people attended in support of the cause, as plunged.

A line of people in no particular order held white towels to hand the plungers as they exited the icy waters.

Many people yelled to their friends that they were “insane” or “totally crazy” to jump into the freezing water of Rose Ponds, but they all cheered as bodies hit the water one or two at a time, clapping as they climbed out and ran for shelter.

Some plungers ran straight to the warmth of Rose Arena, others waited for their friends standing in the crowd to hand them their own blankets, shivering and laughing. A few even braved the cold air longer to take a few pictures.

Anna Guzdzial, a professor at Central Michigan and chief programmer for the Special Olympics, held her daughter’s belongings and stood in the cold air, a smile bright on her face. Though the weather was chilly, she was just happy to see the amount of people around her in support of the games and the plunge.

“It really brings the community together,” Guzdzial said.

Guzdzial said she was proud to see a few of her students from PES 347, as well as people who do not attend Central Michigan, participate in the event.

A shortage of support from Central students could not be found as they lined the halls of the Rose Center in the form of not only plungers, but volunteers.

Inside the Rose Center, students in orange shirts helped line up the plungers, as some held signs with directions to locker rooms. Volunteers arrived at 8 a.m. to set up for registration and get organized.

Sophomore Courtney Marble originally planned to sign up as a plunger, but had to pass up the opportunity due to previous commitments. When those plans fell through, she decided to do “the next best thing,” which was to volunteer at the polar plunge.

“I really wanted to do more for Special Olympics,” Marble said. “I’m definitely jumping next year.”