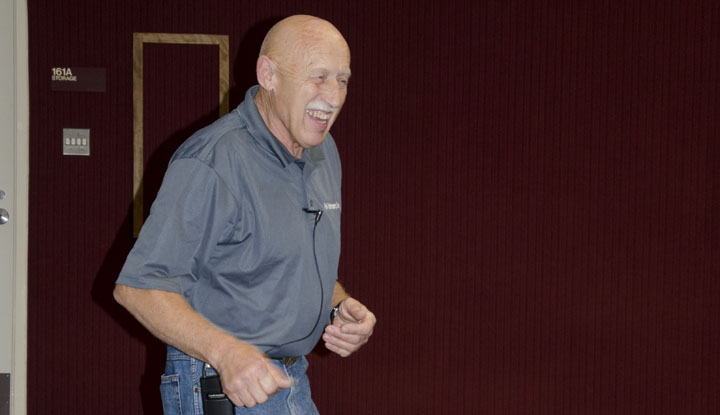 The Dutch, large-animal veterinarian discussed the unconventional methods he uses in his Beal City clinic.

Trained in veterinary science at Utrecht University in the Netherlands, Pol uses methods many would consider ‘old-school’ and in Pol’s own words, “quirky.”

Direct contact with animal fluids does not make the TV star disgusted. As seen on episodes, Pol often removes his shirt sleeves and plunges his hands into any messy task in front of him, sans gloves.

Besides his surprising approaches to handling animals, his success on TV may also be attributed to his ability to think on the spot and utilize ordinary materials to help heal animal wounds.

Pol told the audience that he used flexible, but firm basket material to cast a horse’s broken leg.

“This is what medicine is,” Pol said. “You have to improvise.”

The concept of the show arose from Pol’s son, Charles Pol, who had moved to Los Angeles to pursue a career in producing. While working for Nickelodeon, Charles and a few friends developed the idea for the show.

The friends flew to Michigan and shot 36 hours of film. From that content, they made a four minute DVD and distributed it to networks such as Animal Planet and Discovery.

Nat Geo WILD saw potential in the show and picked it up.

“Our show has really taken off and we’re really excited about it,” Charles said. “It’s a second chance to really spend time with my dad and also do both what we love to do.”

Some may doubt the authenticity of the scenes on the show, but Pol assured the audience that everything shown was real. He told them that there is no way he could put a newborn calf back in the mother after it had been born.

“There are no second takes. It’s not scripted,” Pol said, “and I guess that is why it is so good.”

Being honest with animal owners is paramount to Pol.

“I explain to the owners what is going on, what I’m doing and why I’m doing it,” Pol said. “I don’t leave them in the dark.”

In situations where the cost of an operation might be concerning, Pol is straightforward with the animal owners.

Pol performed a non-intrusive procedure on a choking cow, but when his efforts proved to be in vain, he was honest with the owner about the cost of an operation and the likelihood of success.  Pol respected the farmer’s decision to put the cow down.

Pol is one of the few large-animal doctors in the Mount Pleasant area, which may feed the success of his clinic, but his clients find his honesty helpful and his confidence comforting.

When her horse became sick suddenly on a freezing winter night, Pol drove to the barn and stayed with the horse until 1 a.m. According to Sweeney, Pol saved her horse’s life.

Pol continued to be Sweeney’s primary veterinarian for many years.

“What’s so surprising is how the animals respond to him,” Sweeney said. “Many of them sense his confidence and his ease with them. They trust him.”

But Pol is running into several problems within his practice.

Despite his wide fan base and viewer loyalty, Pol has critics who oppose his methodology.

Blog posts and comments online criticize him, saying he does not uphold the conventional values of veterinarians though there is no indication that his medical methods do not meet Doctor of Veterinary Medicine standards.

There is also the issue of the recent reduction in small animal farms.

His practice has gone from treating predominately large animals to 60 percent of the animals being small.

Pol remains positive about the future.

“That the show is this popular is really surprising to me,” he said. “It’s in 26 countries.”

Because of the show, clients have come in from all over the country, including Alaska and Hawaii.

According to Charles, there will be a new season next year.  They are currently filming season four for the series.