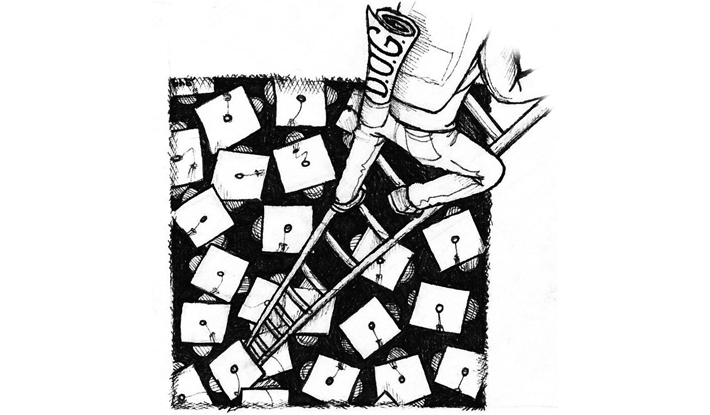 Sick of the system keeping you sedated on vapid television, superfluous advertisements, and supposed “breaking news” (i.e. Miley Cyrus’s new haircut, the polar vortex being covered for the billionth time in one night, and fluffy opinion pieces in newspapers/magazines)?

Well, I am. In the words of Lupe Fiasco, “If you turn on TV all you see’s a bunch of ‘WTFs.’ Dude is dating so and so, blabbering bout such and such. And that ain’t Jersey Shore, homie that’s the news. And these the same people that supposed to be telling us the truth.”

Fiasco could not be any more right. Corporate media has a stronghold over our daily news. That sucks, big time. Now what?

I stumbled into Kaya Coffee House the other day and came across the most interesting packet entitled the “CMU DOG” or disorientation guide. It was a packet pretty much criticizing CMU and its affiliations with oil and gas corporations in the first issue, and its involvement with technology in the second. While this zine may be blunt, harsh and biased, I got to thinking, maybe it has a point.

I soon saw that the “CMU DOG” wished to provide an outlet for more subversive and radical thoughts. According to the CMU DOG, it’s time to “unlearn” and “disorient.” I think the CMU DOG is very beneficial to the everyday student at CMU, and should be read by all.

Yes, while many of us have the privilege of attending a college or university, there are still many flaws with the current system of institutionalized academia. Most college students have become too comfortable with the process of memorization and regurgitation to attain their desired GPA; shower, rinse, and repeat.

The time has come to think critically! That is why I find the D.O.G comes to be so useful. After reading these zines and checking out their website, I discovered that The Dis-Orientation Collective is a group of students at Central Michigan University, and across the state that jointly works to create Dis-Orientation Guides commonly known as these D.O.G/DOGs.

What is a Dis-Orientation Guide/DOG?

After reading an issue of the D.O.G, it becomes obvious that the Dis-Orientation Guide cannot be given one solid definition because that would defeat the purpose of an ever changing collective project. But traditionally in history, a dis-orientation guide is a large booklet made by students that aim to shed light on big problems that their universities and/or their surrounding communities are involved with, condoning or perpetuating.

Some schools create one huge disorientation guide that includes different chapters on concerns such as divestment, technology, sexism, racism, unsustainability, problems with faculty and much more. The way that the CMU DOG has decided to go about it, though, has been to release different issues approximately every month and a half. You can check out their first two and learn about their upcoming issues on their homepage here.

The creators of the CMU DOGs choose to remain anonymous, which gives the subversive text quite an “underground” attitude. Within minutes of reading CMU’s disorientation guide, you will notice the strongly opinionated tone, controversial subjects, and nonconforming doodles, visuals and graphics. The Dis-Orientation Collective’s About section states “We are a collective of students that are fed up with our campus newspapers blabbering about hogwash. So, we are trying to create alternative venues for subversive writing, doodling, poetry, etc. Any topic and or dis-orientation guide ‘issue’ is welcome so long as it’s ‘real talk.’”

It is evident that the topics being covered in the CMU DOG are provocative, and would not be a typical day-to-day subject matter, which leads to the very point of their creation.

According to their website, “The Dis-Orientation Collective is an emerging collaborative effort between individuals at various universities.” In brief, though, this collective is a decentralized group of folks “working on centralizing dis-orienting information about universities.” One of their aspirations is for students to start learning about real issues that are not broadcasted in the mainstream news. Once these topics are being spread and incorporated into the public narrative, action will hopefully be taken by students to disrupt the status quo of all suppressive systems, starting with universities.

In one sense, this is a consciousness raising project, aimed at facilitating the recognition that universities in general are problematic establishments and that action must be taken to mend this. This is what I have taken away from the CMU DOG.

An example which is discussed on the Dis-Orientation Collective’s website is the fact that the University of Southern California has been significantly underreporting rape. This is not an isolated occurrence! The contribution to and perpetuation of rape culture by administrations of colleges and universities nationwide is a pervasive and systemic issue.

Another primary example of systemic injustices that universities are highly involved with is the marginalization of students— predominantly students of color and students from lower- and working-class backgrounds — through the debt system. Such disenfranchisement also cannot occur in isolation. Disorientation guides are screaming and hollering, trying to wake students up, showing that these kinds of problems are dependent and rely upon the structure of our “education” system and upon all universities that participate in this “education” system.

Of course, these are not the only two such disputes that are covered by the CMU DOG or disorientation guides in general. By exploring the published as well as the up and coming CMU DOGs and disorientation guides from other schools, one will notice the similar patterns throughout many different universities. I began to wonder what does this all mean?

If you have not picked up an issue of a CMU DOG, I highly suggest you do so. Whether you read them online, pick up a hard copy at Kaya Coffee House or the Mary Ellen Brandell Volunteer Center, give it a read through.