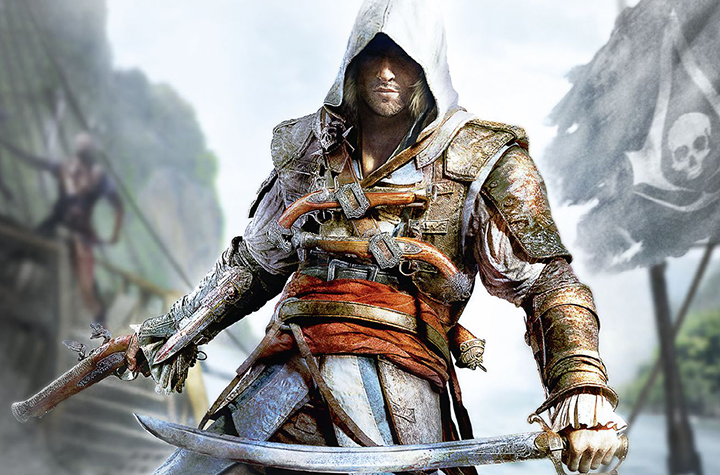 You play as Edward Kenway, a pirate with little on his mind other than money. Instead of being a member through blood, Kenway forces himself into the guild of assassins. He takes it upon himself to race the Templars to find the “Observatory,” a device able to show where anybody on earth is.

It’s pretty astounding how little I enjoyed “Assassin’s Creed 3.” Rife with bugs and glitches, it provided a world where you could hunt and explore the woods. “Assassin’s Creed” should be about assassinating. Being a part of the Boston Tea Party is fun in theory, but throwing tea into the harbor is boring in practice. Watching the founders sign the Declaration of Independence isn’t what I would call thrilling. There wasn’t enough assassinating in “Assassin’s Creed 3.”

“Assassin’s Creed 4” fixes all that. Once the world opens up and you get your ship, sailing around and attacking other ships for their loot is the most fun I’ve had in all of the franchise.

Let me paint a picture: you’re sailing your ship the Jackdaw and see another ship on the horizon. You take a look at it through your telescope and find it’s carrying wood, metal, and rum. Jackpot! You set sail towards it and unleash hell with your cannons. After an explosive battle the other ship is incapacitated. Now you grab a rope and swing over to the other ship. Now kill. Kill a lot. Once the battle is over your men cheer in victory. Reward yourself with a nice dose of endorphins. Rinse and repeat.

The hand-to-hand battle on the ships is my favorite part because there are a few ways to handle them. The goal of each battle is to kill a certain number of crewmen; the bigger the ship the more you need to kill. The standard way to handle the enemies is to face them as they come at you one-by-one.

The next way is to sprint across the ship and assassinate anyone not aware of you, lifting them into the air with your blades and slamming them back down. Or my favorite, you can stalk your victims from high above. Walking across ropes and from mast to mast just to get an aerial assassination is one of the most satisfying things in video games.

The game takes place in the Gulf of Mexico, so you must sail from city to city. Because you spend so much time on the water, the game develops a grandiosity heretofore unseen in the Assassin’s Creed franchise. It feels so much bigger than it actually is. The amount of traversable land in the game is the same as in previous ones, but water travel makes it feel so huge. And while sailing from one city to another can take a few minutes, it’s fun to reward yourself and attack a few ships on the way.

When you’ve had your fill of naval warfare, make your way to the various cities strewn across the map. In the cities you’ll find the standard high chapels to leap off of into piles of hay. Make your way passed the guards of a restricted area for a treasure. Hire mercenaries, take assassin contracts or just explore the city. It’s all been done, but it’s still fun.

My two big complaints with “Assassin’s Creed 4” have to do with slowing down gameplay. Why in the world are there so many missions where you just follow and eavesdrop on somebody? All you do is walk, hide behind a corner before they see you and start walking again. In the original “Assassin’s Creed” there were lots of missions requiring you to sit on a bench and eavesdrop on a conversation. The developers realized that’s a mindbogglingly boring thing to do, so they rightly didn’t include those missions in the sequel. These following missions are only slightly less boring, but a thousand times more prevalent.

The other big gripe I’ve got is that the game forces you to leave the world of pirates and enter our boring one. A third person camera is abandoned for a first person view, and the pace at which you walk can only be described as glacial in comparison to running across rooftops and jumping from two story buildings. I was hoping we’d never have to leave the animus thanks to Desmond not making an appearance in the game, but we’re still forced to walk around our world without any fun or murder. Does Ubisoft realize we play games to escape from reality?

“Assassin’s Creed 4” does a great job at picking the franchise up from ground, brushing the dirt off, and running forward at breakneck speed. It’s beyond fun. The ship combat alone is worth the price of the game. With a few hiccups here and there, the game is overwhelmingly good. If you haven’t played an “Assassin’s Creed” game yet, pick this one up. It’s the apotheosis for what the franchise can be.