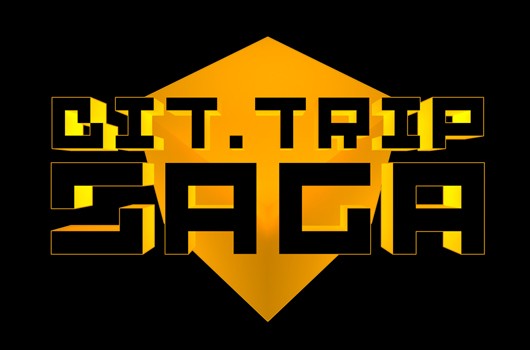 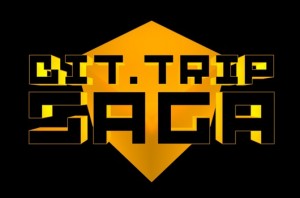 The BIT.TRIP series got its start on Nintendo’s WiiWare online store on the Wii. This series consists of six rhythm games, displayed in a retro style of gameplay and shows the evolution of gaming in five intense types of gameplay. BIT.TRIP SAGA ports all six games to the Nintendo 3DS, while BIT.TRIP COMPLETE puts all six games on a disc and includes a lot of bonus material not included in the original WiiWare games or the 3DS compilation.

The first (BEAT) and last (FLUX) games in the series use the same style of gameplay—a rhythm version of pong. In these games the player has a paddle on one of side of the screen (left for BEAT and right for FLUX) and the player must reflect beats in rhythm with the songs. These two games look and sound great on the 3DS, but as the player gets to more difficult parts of the game, there are several frame rate issues if the 3D is turned on.

Also the gameplay has changed drastically from the original Wii versions. In the Wii versions the player would hold the Wii remote on its side and rotate the controller up and down to move the paddle. On the 3DS, however, the player can do one of two things: use the slide pad or the stylus. The slide pad is not very precise, and even though the stylus is very precise, it can be very easy for the player’s hand to cramp up making it hard to beat each of the 15-minute levels.

The second game of the series, CORE, plays exactly like its Wii counterpart. Sadly, this game has the most issues on the 3DS. While playing this game it goes through the same frame rate issues that the rest of the series goes through on the 3DS, but it also has some major sound issues. About halfway through the second level the sound may or may not cut in and out, causing the player to miss beats and possibly even fail, forcing players to restart the lengthy levels.

The other games in the series play quite well, except for some small frame rate issues that can be stopped by turning off the 3D. Also, the sound of the game is seriously lowered by playing on the 3DS. Players can have their headphones in with the volume at full blast and still have a conversation with a friend. Rhythm games should be played at a loud enough volume to avoid interruption—even friends.

COMPLETE plays flawlessly. The visuals are perfect in their retro style, and the sound will not cut in and out. This game features several bonus features that were not in the original games, including easy and difficulty modes, 120 new challenge levels (20 for each game) and several other unlockables.

Even if you own all the games on WiiWare, COMPLETE has enough additional content to validate its purchase. COMPLETE is the definitive version of the BIT.TRIP series, and should be played by a fan of rhythm or retro games. SAGA may have a lot less content but is portable and can be played anywhere—a must have for anyone who wants this series on the go.

Not only are these games fun to play on their own, but the game has a very deep story that is open to interpretation.