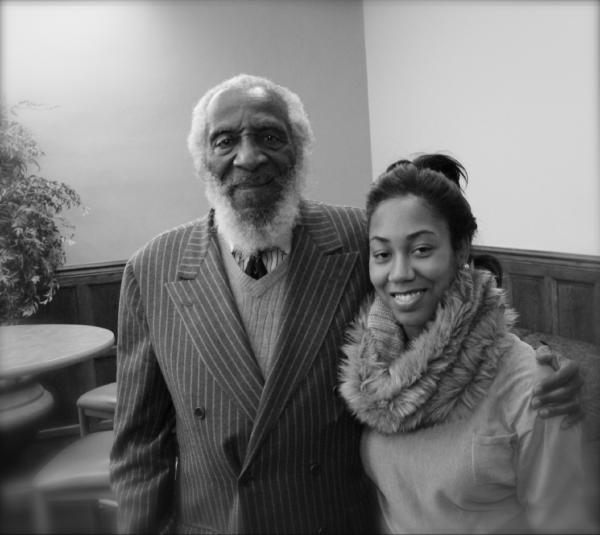 Being introduced with a foreword from President George Ross, Gregory made it a point to acknowledge the many “invisible” people behind the scenes of his appearance for the evening.  Gregory thanked the stage crewmembers, drivers, and others involved with the show as he expressed his gratitude for being invited back after appearing at CMU 23 years ago.

“We’ve left you a mess to clean up,” Gregory said.

The statement was one that he would announce repeatedly throughout the course of his speech, admitting that his generation has provided very a chaotic foundation for the current generation to make due with.

With his experience working side by side with the late Dr. Martin Luther King Jr., Gregory recalled many moments of turmoil and progression during the civil rights movement as well as moving forward from it in his fight for equality.

Sitting on his stool facing the crowd, Gregory mixed his comedic material with the general seriousness of his message to be conveyed.

“White ain’t got nothing to do with the color, it’s about the attitude,” Gregory said.

Gregory poked fun at both groups, including various gags at white and black people. He pointed out major differences that are analyzed heavily, while highlighting (in the several aspects) what makes them similar.

“There are white folks problems, and there are black folks problems,” Gregory said. “The only difference is, white people are lucky, because we wish we had their problems.”

Gregory says that it is all about kindness and politeness, and when asked if he agreed with the idea that African Americans are still “on the plantation,” he quickly agreed.

“You’re absolutely right we are,” Gregory said. “Not physically, of course not, but the difference is that today if a black man got lynched, they’d be surprised by it.”

He believes that the generation as a whole is afraid to fight, and he apologizes for that. Gregory says it is his responsibility to give information — believing that power is not in money or an education, but in good information.

In the spirit of providing such information to offer a sense of power, Gregory concluded the evening with one statement: “Give me an army that’s willing to die, and it can defeat an army willing to kill.”