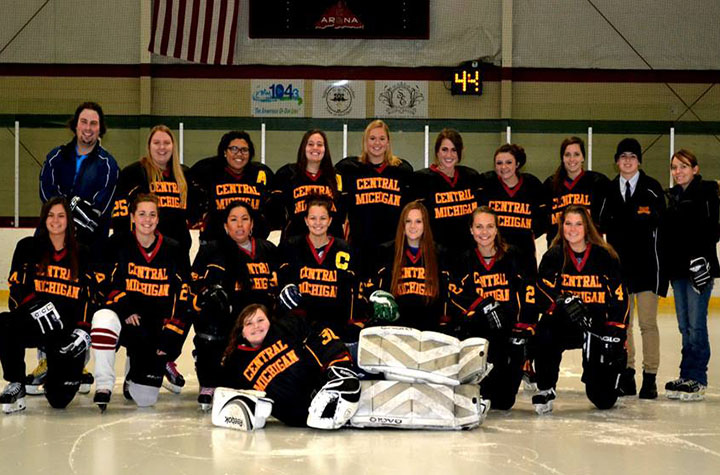 The Women’s Club Hockey team has faced several challenges this season and throughout its past five years being on campus.

Instead of letting the obstacles of having a coach quit on them in the beginning of the season, losing players throughout the year and having a low turnout to games discourage them.

The Women’s Club Hockey team is using those obstacles fuel their motivation to work even harder in the upcoming season.

Coach and junior Matt Meyer said his team brings a different aspect of female athletics to CMU and that the women’s club hockey players are a “rare breed.”

Through Meyer’s eyes, people don’t see how much women’s hockey has to offer. Meyer said the players bring determination and a driven attitude to the team, which is something he admires a lot.

“You always have your standard female sports like volleyball and softball, but not a lot of people really get exposure to women’s hockey,” Meyer said. “Women are at a disadvantage with hockey because it’s a predominantly male-run sport.”

Meyer said the team has the type of character he wants on and off the ice. Whether it’s practice or game day, Meyers said the girls bring a lot of enthusiasm and their work ethic is pretty unmatched.

This is junior defender Emily Hagan’s first year on the team and she admits that she already loves it. Hagan used to play sports when she was little and decided to start back again while in college.

“I love being on a team and I met so many new people through everybody, which was awesome,” Hagan said. “You’re way more involved with the community being at the rink here.”

Junior forward, Abbi Pollack has been playing for the team three years now. Pollack said the most rewarding part of being on the team is helping out the new teammates and watching them improve immensely throughout the season.

Challenges also come with the sport as well. The team said it doesn’t feel women’s hockey gets the proper respect it deserves. The team said it feels underrated by CMU students since no one really knows the team is there.

“You can come to guys games and their bleachers are full,” Pollack said. “Then we have our home games and its only family.”

Pollack said the expenses are challenging for the team as well because the rink isn’t owned by CMU.

“We do a lot of fundraising on our team,” Pollack said. “It’s kind of a challenge to keep the girls wanting to play despite how much it’s going to cost.”

“We pay for everything and a lot of the men’s team gets stuff paid for, but we have to think of fundraisers, “ Steffey said.

A few of the fundraisers the team does consists of collecting lofts in the dorms, a Yankee Candle fundraiser and helping out with the little kids skate at the rink.

Another off-the-ice challenge is learning to balance time between playing hockey and school. Hagan said she usually brings homework from her classes to away games. The girls have club library times as well, where the team would meet in rooms together to study.

While on the ice, the team hasn’t won a game up until the weekend of Feb. 15, which gave them a two game winning streak. The team’s overall record is 4-16. Even though it’s the end of the season, the team is ready to push forward to the next season.

The team also encourages more women to come out and play for the team as well, regardless of having a ton of experience or only a few years.

“The more girls the cheaper it’s going to be,” Pollack said.

Off the ice, the girls are like sisters. Recently, the team had an away game at Lake Superior State University and hung out afterwards and went to dinner.

Pollack said the team doesn’t just travel to away game and play the sport and leaves. The girls enjoy bonding and having a good time, win or lose, as well.

“Hockey’s a different sport in general,” Pollack said. “You don’t just go to practice and then everyone goes their separate ways.  We all hangout outside of hockey and do a lot of stuff together.”