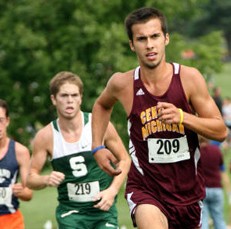 Getting booed at your first team meeting can be tough.  But cross country runner Jason Drudge–the object of the laughter–is just happy to be here.

The junior from Grayling, Michigan did the unthinkable this past year.  He transferred from Western Michigan University to Central, crossing the line of one of the greatest rivalries in Midwest college sports.

At a track and field meeting earlier this fall (Drudge runs on both the cross country and track teams), his new teammates weren’t completely ready to welcome him with open arms.

“Yeah, I did get booed at the track and field meeting earlier when I first started practicing, but I told the guys that even at WMU, I still wore CMU gear…. So as long as I never wear a Western shirt again, I think I’ll be fine.”

Drudge was a promising athlete in high school.  There was no cross country team at Grayling, so he played football and basketball.

However, in eighth grade he realized he enjoyed the solo aspect of running, “where everything is on your own shoulders.”  After football practices and basketball games, he ran whenever he had the chance.

His passion led him to Western, where he believed he could accomplish his goal of running at a Division-I level.  Unfortunately, promises of the emergence of a men’s track and field team at the school were broken, and Drudge was forced to run for the Bronco’s club team instead.  After two years there, his patience had worn thin.

“I was told numerous times that the men’s (track) team (was) coming back.” Drudge said. “Well, as time went on, so did my eligibility.”

Drudge admits to some mixed feelings of his time at Western.

“I wouldn’t say that I wasted two years of my life there, because I met some great people while I went,” Drudge said. “But I wanted to test the waters running in college at a Division-I level.”

Now, Drudge is able to do that, as he’s already competed for the cross country team this fall, finishing 10th in the Jeff Drenth Memorial earlier this month.  He also plans to compete for the track and field team. At last, he seems to have found a home to go to school and compete in the sport he loves.

“I like Central a lot so far,” Drudge said. “The campus is really easy to navigate and the classes are great also.”

Drudge is aware that his time at Central has been relatively short, so when asked to compare the two schools, he didn’t jump to any notions one might hear from rowdy football fans shouting at each other at a  typical Central/Western weekend but did say that Central fans have more school pride.

“Central students seem like they have way more pride in their school,” Drudge said. “Almost every student wears Central gear daily whereas at Western, you would only see it at sporting events…and everyone seems friendlier, I’ve already met more people here than I did at Western in two years, and no, it’s not because I’m the smelly kid (laughs).”

While Drudge has not been pleased with his early-season performances, his optimism for the future seems high.  After getting a “small taste” of Division-I running, he said he can’t wait to work and improve.  And despite his Bronco roots, his Chippewa pride grows steadily.

“Central was a better fit for me. So far so good.”