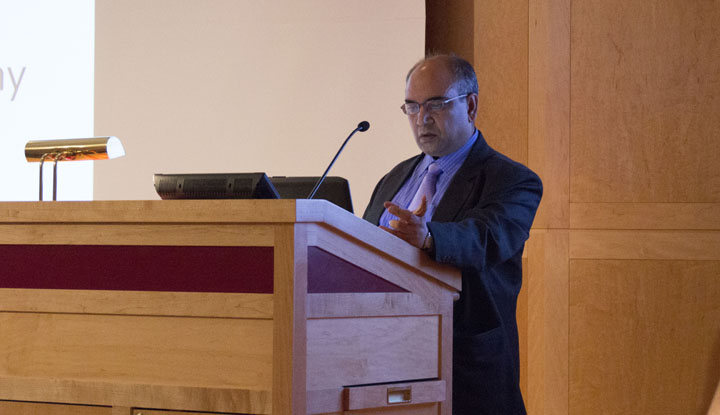 Bijay Raj Gautam, a lead human rights activist in Nepal, spoke in the Park Library Auditorium Thursday to raise awareness on Nepal’s tumultuous political history and the current push to have a constitution drafted.

Gautam has been the executive director of the Informal Sector Service Center (INSEC) for 15 years, working to establish recognition of human rights and peace in his homeland, which has suffered decades of unresolved conflict.

“When you see the people’s misery, when you see people suffering, that motivates you,” he said about his drive to continue working on the cause.

Located between China and India, Nepal is slightly larger than the state of Tennessee. According to Gautam, it has a population of 27 million with 125 ethnic groups, about 100 languages, and 10 different religions but is dominated by Hinduism.

The country is rich in diversity but the differences between the Nepalese people leads to conflicting interests.

Nepal has endured several rises and falls of different regimes, all within a span of 70 years. Democracy was first introduced in 1950 but was dismissed just 10 years later.

It wasn’t until 1990 that democracy was reintroduced, but in 1996 a Maoist group, also called the Communist Party of Nepal, launched an insurgency bringing 10 years of internal conflict. The insurgency resulted in 100,000 people displaced and 13,000 killings according to Gautam.

In 2005 the Nepalese King mobilized an army to fight the Maoists, but in 2008 the monarchy was abolished and Maoists became a leading power. The Constituent Assembly (CA) was then established to write a new constitution but the assembly was dissolved by the Maoist government in 2012.

According to Gautam, many of the people who committed serious human rights crimes are linked to the government and are thus protected. Protests have erupted across the country and the interactions between police and protesters have resulted in numerous violent attacks.

“Police think they have immunity and can hurt anyone,” Gautam said.

Gautam and INSEC aim to protect the civilians and push for a peaceful resolution.

INSEC and other leading civil society organizations have played key roles during the conflict by raising awareness about Nepal’s civil war, conducting national and international advocacy and campaigns, protecting civilians and facilitating negotiations between political parties and Maoists.

“I’m part of the solution, not the problem,” Gautam said.

To illustrate the severity of the precarious situation in Nepal, INSEC has kept track of the human rights violations and recorded scenes of protests using hidden cameras.

According to Gautam in 2013, 377 civilians were killed and 144 were abducted. The number of people going missing is especially alarming since there have been reports of Maoists using child soldiers.

During the presentation, footage from hidden cameras was played. The clips show the violent interactions between police and protesters. They display the confusing dynamic between INSEC workers in blue vests and the police.

In the clips INSEC workers can be seen helping civilians escape a barrage of attacks from policemen with swinging batons.

The police are ruthless with normal civilians, but stop their strikes once a blue-vested INSEC worker arrives to offer aid to the victim, though Gautam claims INSEC workers are often injured in the process.

“Police are seen as enemies, not as friends,” he said.

During his presentation Gautam made an appeal to the audience to raise awareness about the conflict in Nepal.

He hopes to get international support believing that it will put pressure on the Nepalese government to draft a constitution.

“Human rights, peace and democracy do not have any national borders,” Gautam said.

The video clip shown during the presentation.