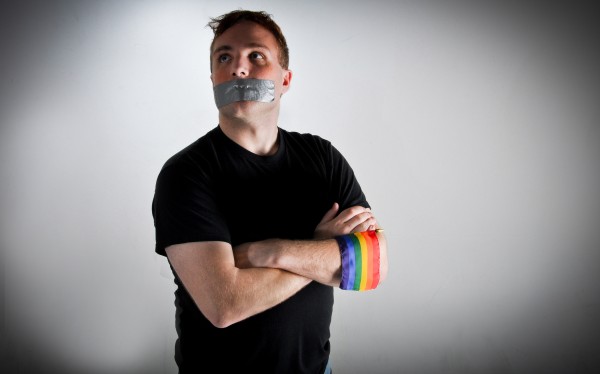 Did you know you can be fired for being gay? LGBTQ equality comes to Mount Pleasant in an anti-discrimination ordinance curated by local leaders who say this is a civil rights issue–that needs everyone’s attention.

Marina Allen* was walking into the Meijer grocery complex in Mount Pleasant, Mich., when she passed a man and his small daughter. Marina was wearing a graphic tee that touted the phrase, ‘I can’t even think straight.’ The stranger eyed the Central Michigan University student and pulled his daughter aside.

Marina’s incident — societal discrimination of the LGBTQ community — is by no means isolated, especially in more conservative areas. But it is indicative of a larger issue brewing in Michigan’s municipalities. Marina can be called a homophobic slur and her middle-aged bully is free to walk away, but he could also fire Marina if she was his employee, ask her to leave the restaurant he owns, or refuse her housing. Under Michigan law, the bullies can discriminate.

The Elliott-Larsen Civil Rights Act, Michigan’s anti-discrimination law passed in 1976, protects employment and use of public accommodations based on everything from race and national origin to height and marital status. What it doesn’t protect is sexual orientation and gender identity. There’s no federal law protecting these rights and only 21 states have anti-discrimination laws for sexuality. LGBTQ equality in states like Michigan face not just pervasive heterosexism, but the fight to be recognized as — what Secretary of State Hillary Clinton articulated — “a human rights issue.”

And part of that battle is waging in Mount Pleasant. On Nov. 19, 2011, a group of professors and local church and community members presented the Mount Pleasant City Council with an anti-discrimination ordinance proposal. The legislation would prohibit rental or employment discrimination based on sexual identity, gender expression and perceived sexual orientation. The ordinance is now a matter of public documents, slated to be discussed at length at the city council meeting on Feb. 27.  If after 30 days no referendum is filed, the new ordinance will take effect. It’s a struggle fated for victory, but like other LGBTQ issues, not one without questioning.

“It’s unlikely there will be many complaints, but by the very fact that you have it makes a statement,” said Norma Bailey, CMU professor of middle level and diversity education. “It makes a statement that Mount Pleasant is a welcoming community — that we want to support everyone here, not just certain people.”

Bailey, an LGBTQ advocate, has been at the forefront of drafting the ordinance, along with Wesley Church pastor Charlie Farnum. The ordinance effort is receiving guidance from Equality Michigan and Unity Michigan, both statewide LGBTQ advocacy organizations, and support from the Unitarian Universalist Fellowship of Central Michigan (UUFCM) .

The support seems paramount — and it is — though the ordinance’s greatest challenge lies in its details. An anti-discrimination ordinance was introduced to the Mount Pleasant City Council in the early 2000’s to no avail: the proposal wasn’t well-written and it seemed to lack the community support — the buzz essential for passing. Unlike its precedent, a local attorney wrote the current ordinance. It’s more lucid and will be backed by individual stories and statistics.

But the ordinance is still predicted to encounter the same barrage it faces every time one is brought to a community. Anti-discrimination ordinances provoke the ire — and eventual diatribe — of national ultra-conservative, anti-LGBTQ organizations.

“Mount Pleasant isn’t a very politically sophisticated town because not much goes on here, which is fine,” said Farnum. “But then when the big dogs [the organizations] come sweeping in, it sort of goes both ways.” Both ways meaning the ordinance will face abnegation, like ‘gay rights are bad for the family,’ while groups like Equality Michigan will then work to counteract the public howls.

However sharp the opposition’s bite, the ordinance won’t completely need saving. It is being carefully crafted to include support that reveals a larger picture on civil rights for the gay and transgender community. As part of gathering information for the ordinance, the UUFCM conducted a survey in nine arbitrary Mount Pleasant neighborhoods; they asked 144 people if they knew there were no protections for the LGBTQ community and 78 percent were unaware. When asked “do you support basic protection of jobs, housing, and accommodations for gay and lesbians?” 88 percent said yes and 49 percent said they’d be glad to help with the efforts. It seems the majority, regardless of their personal beliefs, support basic rights.

“Most people are against gay people getting married, but most people are for rights, which isn’t too surprising,” said Farnum. “Almost everyone I’ve spoken to so far, when I say, ‘did you know that in Mount Pleasant a restaurant owner could look at a guy with a pink shirt and say, ‘I think you’re gay, get out of here’ with no repercussions?’ They are dumbfounded.”

If social support of the ordinance seems palpable, then Mount Pleasant residents may wonder why the anti-discrimination ordinance is so important. Besides the fact that Mount Pleasant is the only city in Michigan with a large college to not have an anti-discrimination ordinance, and the fact that according to Bailey, Michigan will not amend its Civil Rights Act to include LGBTQ in her “lifetime,” there’s something more telling going on. It’s what Bailey and Farnum call “the fear.”

“The fear is real. The perception of the bias is real,” said Farnum. “We know the bias is there for some people.”

Civil rights are arguably the most important signal of American liberty. For many, being LGBTQ in this community seems a stricture of everyday life.

Alex Shore* attended Beal City High School near Mount Pleasant and felt like an “outsider” because of her sexuality. When word got out that she was gay, she wasn’t only ostracized by peers but also lost some of her closest friends. Even her two best friends, who are both heterosexual, faced anti-gay accusations.

“It scarred me for life and in high school it drove me to cut and alienate myself from everyone except for a select few people who are still my best friends,” she said. “If not for them, I probably would have considered, and possibly attempted, suicide.”

Anna Mayne even felt like an outsider on CMU’s campus. The sophomore hailing from Ann Arbor, Mich., — known for being a liberal community — says that although she was once openly gay in high school, she only recently came out at CMU. It began with a realization that her roommates were openly,  expressively “homophobic,” and morphed into Anna disengaging from the thought of coming out here altogether.

“I was president of my high school’s gay-straight alliance, participated in protests and was even quoted in Between the Lines, but I feel like I am restricted in Mount Pleasant,” she said. Anna says she doesn’t try to force acceptance unto others, but would rather not put up with homophobic remarks. “I would certainly not mention it to my co-workers or my boss when I get a job here,” she said. “I have never felt so hidden before.”

A CMU staff member, who preferred to not be identified by name, had issues finding housing because she was a lesbian.

“I was renting from a person who made a couple of comments about things that made me a little leery. I kept thinking, ‘what if she finds out I’m a lesbian?’ ” she said.

She eventually decided she wouldn’t take the risk and ended up buying a house.

“I have a good job, a good career, so I can afford to do that, but what about people that can’t? So then they have to hide themselves in order to have the rental property that they should be able to have whether they were hiding themselves or not?”

The stories are as manifold as the candid pleas to withhold the names that supplied them. The fear constructs a kind of trammeled life for some Mount Pleasant residents. Farnum imagines the ordinance will eventually curb the willingness of people to publicly discriminate, hence eliminating the fear.

“The biggest hope is that the LGBTQ community in Mount Pleasant will be able to come out of the closet, and just feel more comfortable being themselves in public,” Farnum said.

“We don’t educate people; they’re ignorant. So some people believe that being gay is a choice, so why would you protect people that choose to do something that’s, in their minds, immoral?”

Whatever effect the anti-discrimination ordinance ultimately has on peoples’ mindsets, Bailey reiterates a thought on these efforts, perhaps the most cogent: “People, I do believe, are fair-minded,” she opines.

After Bailey passionately details her work on the ordinance, she pulls out a sheet of paper she uses in her middle-level education classes. “It’s this quote by Martin Luther King Junior that reminds me of all this,” she says, followed by a sigh — and a smile. “The moral arch of the universe bends at the elbow of justice.”

*names have been changed.

Sign the “Don’t Change Yourself: Change The Law” petition to support an anti-discrimination ordinance in Mount Pleasant, Michigan.