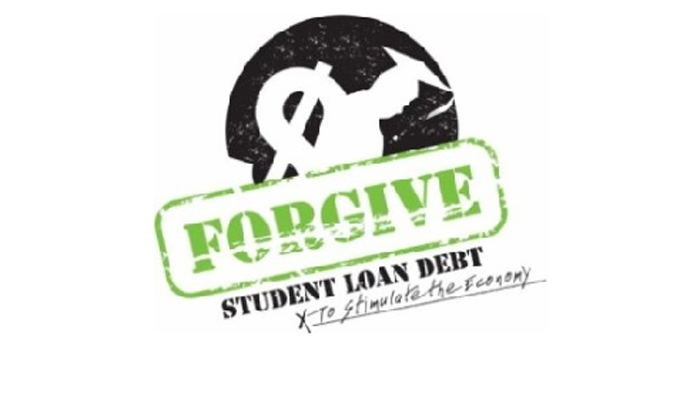 As someone who is about to transition from being a care-free college student to a loan-burdened graduate in December, I have to say, I am absolutely terrified. At the time of graduation I will have over $35,000 in loans and am constantly reminded that the prospect of finding a half-decent job is grim. I’m also aware my loan payments will be a large portion of my paycheck, which will make it very difficult for me to get out from under my debt.

Facing the reality of my situation has made me look towards my graduation date with excitement, anxiety and fear. Then, out of nowhere one day, I received an email that contained a petition proposing student loan forgiveness as a way to stimulate the economy. I wondered if I was dreaming.

The petition was formulated by a man named Robert Applebaum, who first suggested the idea in 2009 while debates over the economic stimulus package were taking place. He posted his essay concerning the topic on Facebook and since then it’s exploded, and now has support from U.S. Congressman Hansen Clarke, D-Mich. While the details of the plan still need to be specified, the theme of the proposal is that students who have taken out loans would have some, if not all, of these loans forgiven—so they can spend it elsewhere as a means of stimulating the economy.

Skeptics and critics have claimed there is no possible way the United States government could possibly afford to do this. But, why not? Have we already forgotten the $787 billion stimulus package that was awarded to the banks and other companies who found themselves in a financial disaster in 2009? Applebaum thinks it’s more reasonable to help those struggling with debt rather than provide banks and other institutions with stimulus packages since they are the ones responsible for the crisis in the first place. I’m inclined to agree with him.

“Many of the vocal nay-sayers to this proposal seem intent on ignoring the fact that Washington IS going to spend trillions of dollars, likely in the form of handing blank checks over to more and more banks, as a way of getting the economy under control,” Applebaum states in his proposal.

If we all accept the fact our government will be paying enormous amounts of money to stimulate the economy regardless, then why don’t we demand that it benefit us for once!

I know what you’re thinking: “Yeah, this sounds great, but it will never happen.”

The reason we’re all so skeptical is because college students are so used to being under-represented and mistreated—we simply can’t fathom something so beneficial could ever happen to us. University students across the country need to stand together on this issue. It’s important to consider how many college students there are in Michigan alone—and the impact we could have if we all united together on this issue.

As of this week, over 600,000 people have already signed the student loan forgiveness petition and the numbers are growing rapidly, but we need more signatures. Being a college student with $35,000 in loans, I will be looking at paying in between $350-400 a month if I want to repay my loans in 15 years. With tuition rates continually rising, many students will have to take out even larger loans and will therefore be paying even more every month.

The question is, as a current college student or recent graduate with student loans, can you afford to not sign the student loan forgiveness petition?