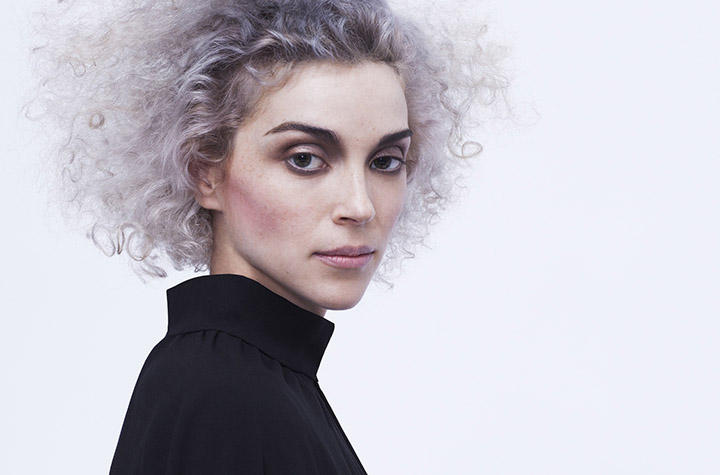 Annie Clark, the enigmatic mind behind St. Vincent, now has four albums under her belt, and each have filled some sort of chasm in the realm of indie pop. Unlike so many artists thrown under that umbrella, Clark’s music isn’t precious or whimsical, and the four records she’s released exude sophistication and a breadth of knowledge in music of the past and present.

She’s punk, glam, blues, soul, avant-garde and manages to incorporate so much without sounding like she’s aping her forebears. “St. Vincent,” her newest album, is an empowering blast of exceptional craftsmanship and emotive songwriting, bridging the gap between Bowie’s gnarled synth-pop and the post-punk classics of The Pretenders.

It’s not too surprising that Clark’s last project was a collaborative release — and coinciding tour — with Talking Heads front-man and new-wave hero David Byrne. Like Byrne, Clark has made a career of not being forced into a box, availing her sound on each subsequent release with an ear toward pop and studio experimentation. For her latest, the singer took a page out of the Bowie handbook and even gave herself a new makeover — that of which, according to the singer, resembles a “futuristic cult leader.”

The description seems apt when listening to the infectious single “Digital Witness,” where Clark yowls out “I want all of YOUR mind” over stomping horns. If this debonaire song ever caught some time on mainstream radio, it would blow right up in a jiffy. It’s pop music that offers a necessary and sobering reminder: art can be pretty damn fun once in a while.

But it isn’t just the single that stands out on “St. Vincent.” Every song on this record shows an artist seemingly at the pinnacle of her powers. The opener “Rattlesnake” (supposedly written right after Clark saw a snake in her yard and ran into the house) is a, ahem, rattling anthem that would be a soaring highlight on another, lesser album. The hook, which asks “Am I the only one in the only world?”, is one of the catchiest things the songwriter has put her name to thus far, and its plea only grows in intensity upon further listens.

Besides her ear-worming choruses, another appealing quality in Clark’s songwriting is her ability to write love songs that aren’t cloying or rote. “I Prefer Your Love” is about her affection toward her mother, with lines like “I prefer your love to Jesus” and “All the good in me is because of you” sung with tender adoration. It’s one of the sweetest songs about finding solace in a confusing world.

On the closer, “Severed Crossed Fingers,” Clark sings of drinking at a bar with a lover, trying to mend a broken relationship over wavering synth lines: “Seeing double beats not seeing one of you.” The longing of these lyrics cast a lingering spell of sadness against the driving songs that preceded it, and it’s doubtful there will be a more affecting closer in 2014.

So many of these songs carry such a mysterious allure that it’s pressing to try and describe it. “Psychopath” is a track fit for the open road and is a great example of how Clark is able to morph simple elements into a textured and hypnotic pop song.

Her lyrics, again, are full of romantic honesty, even in their directness. She is simply one of the finest writers working today, and the fact that she is equally evolving in her sonic palette puts her in the realm of contemporary artists worth mentioning alongside the greats.

The real, honest-to-God pull of her latest record (and, perhaps, all of her work) comes from its cohesion. It’s hard to come by a selection of songs so exquisitely sequenced as this, but it’s even more challenging to seek out modern albums among the wave of recent releases where each song feels connected to an overall personal vision. This isn’t flavor-of-the-week music that will be buzzed about on music sites and end up lost and forgotten in the years to come. It’s an album that will endure because these songs ceaselessly give and speak about the way we love, live, and carry on.