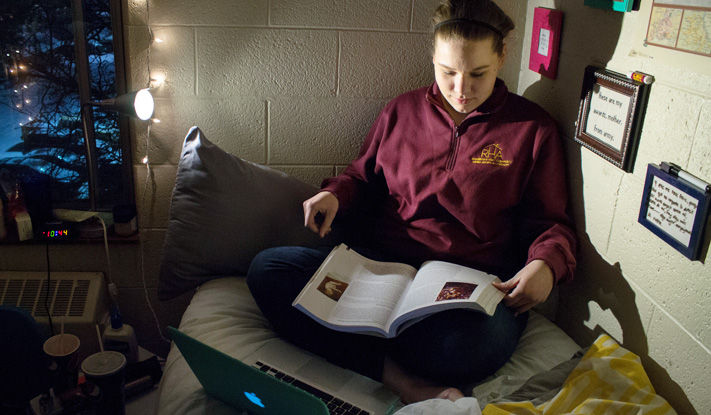 While sitting in my 8 a.m. class, sipping my Starbucks for the third day in a row, I realized that this cannot be healthy. I couldn’t focus in class and all I could think about was how few hours of sleep I had gotten the night before.

As many of us begin to have our first exams of the semester, it may be getting harder and harder to catch up on sleep. With roommates, co-curricular’s, parties and studying, it’s hard enough to stay on track. But what if I told you that keeping a consistent amount of sleep each night could make your grades go up and your body feeling more energized and focused throughout the day?

The average college student gets 6.5 hours of sleep a night and that number gets even lower throughout the course of the year. We are among the most sleep deprived people in the country. The necessary amount of sleep varies from person to person, but most people should be sleeping at least a full eight hours.

I did some research, and it’s actually been proven that during sleep, the facts we memorized that day get moved from our short-term memory into our long-term memory. It takes a long time for us to move into these later stages of sleep, but once we do, that is when our brain has the capacity to store fact-based memories. This means if you’re sleeping six hours or less, you’re getting ripped off.

An ideal nap is between 20-30 minutes long. Less than that isn’t enough, and more than that will most likely leave you more tired. The best time to squeeze one in is during the mid-afternoon.

“When I’m studying and I start to get tired, instead of trying to fight it with caffeine, I take a short nap,” senior Kasey Ryan said. “After I wake up I feel much more focused and productive with my studies.”

Taking a quick nap in between exams may help too. Refresh and recharge.

A lot of college students like to pull all-nighters, especially before exams. Did you know that this actually decreases the ability to learn new material by about 40 percent because parts of the brain start to shut down? It is possible to memorize facts all night and recall them the next morning through short-term memory, but you will most likely have to relearn them later for cumulative finals.

Yes, we sometimes feel the need to consume excessive amounts of alcohol, coffee, and energy drinks, but these mess with our sleeping patterns. It makes sense that we can’t get into the stages of sleep that we need if we keep waking up throughout the night. Alcohol and caffeine make us more restless and therefore feel less refreshed in the morning.

How can we dedicate that much time to sleep with such busy schedules?