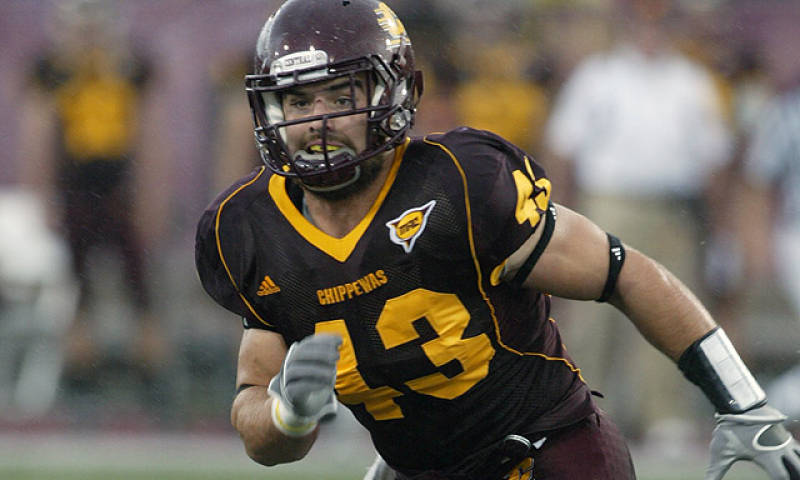 Central Michigan University is anything but a professional hotbed for future NFL superstars but from time to time, the university does produce an NFL player or two.

In 2010, former Central Michigan quarterback Dan LeFevour and receiver Antonio Brown were selected. LeFevour was taken by the Chicago Bears with 181st overall pick in the sixth round but was later released before the beginning of the 2010 regular season. He eventually signed with the Cincinnati Bengals where he backed-up Pro Bowl quarterback Carson Palmer.

Brown was taken with the 195th overall pick by the Pittsburgh Steelers in the sixth round of draft. The former Chippewa ran back the Steelers’ opening kickoff of the season, 89 yards for the touchdown. During the playoffs Brown found his way into the Steelers’ four-man rotation at receiver and made two big plays that proved to be crucial in Pittsburgh’s 2010-2011 Super Bowl run.

In the AFC Divisional Playoffs against the Baltimore Ravens, Brown caught a 58-yard pass from quarterback Ben Roethlisberger on 3rd & 19 in the waning moments, which set up the game-winning touchdown. A week later in the AFC Championship game against the New York Jets, Brown caught a 14-yard pass on 3rd & 6 at the two minute warning, which sealed the victory for the Steelers.

Obviously Brown made a huge impact last season and due to the Bengals’ current quarterback situation (Palmer is threatening to retire if not released or traded) LeFevour may get a chance to compete for the starting job this off-season.

In this year’s draft only former Central Michigan linebacker Nick Bellore has a legitimate chance of having his name called, more than likely after the fifth round. Bellore started 51 consecutive games to begin his career, playing in 52 total games and amassing  472 total tackles, 5.5 sacks and five interceptions during his four-year tenure in Mount Pleasant.

The Whitefish Bay, Wis. native was named to the All-MAC first team three times in his career and was named co-captain the last three years of his collegiate career. Bellore ran the 40-yard dash in 4.84 seconds at the NFL combine and lifted 23 reps of 225 lbs.

If Bellore is not selected he might have to wait for the NFL owner’s demand to place a temporary stay on Judge Susan Richard Nelson’s ruling in favor of the NFL players’ request for  an injunction to lift the lockout. Obviously that issue will have to be resolved before he can sign as an undrafted free agency with an NFL team.

The ruling could come as early as today, which could mean that potential undrafted free agents like Bellore could find a place to play directly following the draft.