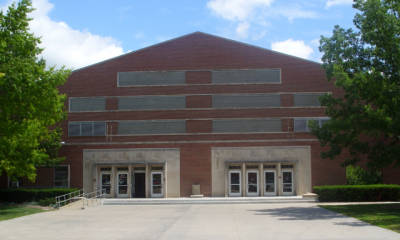 This year has been one of adjustment for Central Michigan University’s volleyball team.

“We consider this a throwback year, this is our arena,” Lindsey Dulude said.

The team is excited about having the facilities to themselves for the season as opposed to normally having to share practice space with other teams as they did in Rose Arena.

Without having to share Finch with any other teams, it has really given the feeling of a home court to the team. Finch has been decorated with banners from some of the greats in Chippewa volleyball history, thus adding more to the feeling that this is home for the volleyball team and not just another arena.

“Finch has a great location on campus for students to make it out to games,” Dulude said.

Finch Field house is located on campus by the Park Library and the U.C.

Yet the advantages to Finch are more than just location and decoration.  Many of the players are enjoying the atmosphere of the smaller building this season.

“It gets really loud in there,” outside hitter Lauren Krupsky said. “They do a great job of setting it up, the fans seem really into it”

On game days, a one-quarter inch pad is laid down in the center of the room.  The “sport court” actually feels slightly harder than the wood surfacing the team previously played on in Rose Arena.

The court is surrounded by bleacher seating, with attendees also having the option of watching from the balcony seating on one end of the court.

Krupsky, who is one of two seniors on the team, has no hard feelings about playing her last season in Finch.

“There’s a lot of history there, but not many recent players get to say they played in Finch their last year,” she said.

Another Finch bonus for the squad has been their exclusive use of the men’s locker room.

“It’s spacious,” Krupsky said. “And we’re not sharing a training room either, which is sweet.”

The volleyball team is adjusting well to their new surroundings and find themselves at 7-7 in the MAC and 13-13 overall on the year.