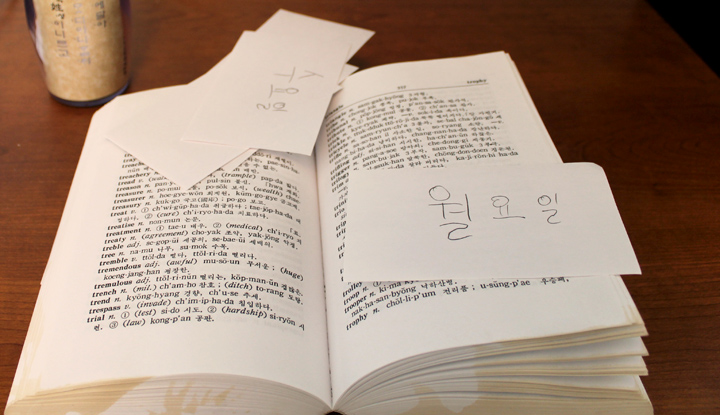 Drinking is so embedded in South Korean culture that it’s normal for a professor to take students out for a night of food and drink. Near the end of my semester studying in Jochiwon, one of my instructors treated her three foreign students, a few of her grad students, and one of her favorite undergrads, to dinner and drink.

The three foreigners — Chris, a Dane; Jeremy, an American from New Mexico; and me — were a source of great curiosity in our class, simply because we were different. We had been taking the course for weeks and until then had had only a professional relationship with our professor; she knew us only in the context of our class comments and the work we had turned in. Naturally, she was curious.

We started talking about languages. Chris, who grew up in the Netherlands and studies in England, has two mother tongues — Danish and Dutch — and speaks English, Norwegian, and Swedish fluently. Our professor, a native Korean, is required to teach classes in English, and the other Korean students had been taught English all through elementary, middle and high school, then had to take it at university as part of the standard curriculum.

“What is your second language?” she asked me. “English and what else?”

I stammered. “English, I only speak English.”

She crinkled her nose, and I rushed to explain myself, “It’s because, well, I’m American. Americans don’t usually know other languages.”

Just before I graduated high school, the state instituted new requirements for the class below me. To graduate, they all had to take two years of a foreign language. I’ve thought back to that a lot, jealously, and wished that fiat had applied to me. I took one year of Spanish as a freshman, and always regretted quitting.

But would two years of Spanish or three, even four, have made much of a difference at the secondary school level? I used to think it would have, but I don’t anymore. The thing I was most insecure about while I was abroad — both in Europe and in Korea — was being monolingual. In a way, it was humbling: we Americans pride ourselves on our perceived hegemony and ostentatiously believe that the world should bow to our standards.

However, as much as it was humbling, it was twice as humiliating. The people I met who spoke many languages (sometimes as many as five or six) were far more cosmopolitan than I can ever hope to be. Our leaders talk about preparing American students to be internationally competitive, and our economists talk about the increasing reality of globalization, and here I was out in the world, feeling naked.

I should have been learning a second language starting in preschool. It should have been required of me. It should be required of everyone. Sometimes the argument comes up — an excuse, really — that it’s easier for Europeans, because the countries are closer together, and it’s more likely for a French national to find herself in Spain than it is for a U.S. citizen (especially us northerners) to find himself in Mexico.

That may be true, although I don’t buy it. Our national character that we all seem to be so proud of is based on how well we surmount obstacles. The real reason has more to do with an irrational ethnocentric fear that making our children learn other languages will compromise some aspect of what people think our collective cultural identity should be.

English is not the national language, and it never was, nor should it ever be, but I won’t tread into that treacherous territory. Instead, I can only offer an observation. Dutch children are taught English from a young age alongside Dutch, and this has been going on for so long that most of the Dutch people I met spoke English just as well as I do. They were forced to learn English because it is immensely practical to do so since the relatively small population of the Netherlands would not be very successful if they could all only communicate with each other. They are all at least bilingual, but many are multilingual.

I am happy to report that after withstanding these lingual pressures from all angles, the Dutch language is far from dead. In fact, it is very much alive, as I discovered every time I went to the grocery store when I was living in The Hague, Holland. The clerks almost always began talking to me in Dutch, and it was only after I revealed my true identity as a clueless American that they switched, effortlessly, to English.

Children, at home, will speak the native language of their parents, so despite what anxious people might think, teaching all children Spanish (or even Chinese) from a young age will not rob us of anything. It will make us richer.

During dinner, after my professor had talked to me, she turned to Jeremy, the American from New Mexico, and asked him the same question. He had the same answer as I did. And so there were he and I: two Americans in a crowd distinguished not by our excellence, but by our ignorance.