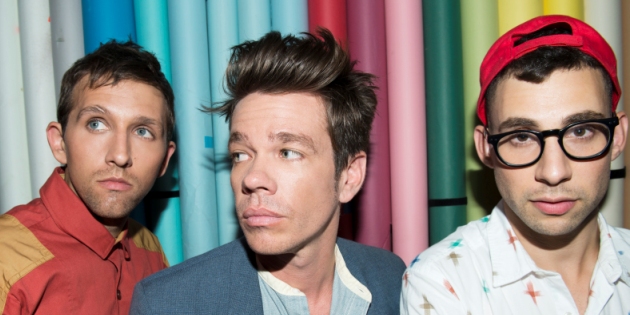 It has been a few years since Andrew Dost graduated from Central Michigan University. A 2005 alumni with a degree in journalism, his life is a little different now.  Dost is touring internationally with his band, fun. and gearing up for the 55th annual Grammy awards airing Feb. 10. In this year’s Grammy presentation, the three-piece band holds six nominations including Best New Artist and Record of the Year.

Following the release of their first album, fun. is best known by tracks from their second release, “Some Nights.” Singles like “We Are Young” and “Carry On” have skyrocketed the alternative pop-rock band to the top of the charts and made them a force for the music world to reckon with. The band was even featured on President Obama’s inaugural playlist.

“Grand Central Magazine” had the opportunity to interview the musician and discuss his whirlwind experience.

How did you find out about fun.’s six Grammy nominations for 2013?

We were at the nomination show, so we found out right there. We were performing, so we were mostly focused on that, but kept getting these thrilling bits of information throughout the night, it was incredible. We found out about the Best New Artist nomination right as we were stepping onstage to perform.

What were your first words after finding out?

Probably something very un-poetic, like “Wow!  Cool!” I’m not great at on-the-spot profundity.

Fun. has gained a lot of commercial and critical success in the past few years. Did the Grammy nominations or hit songs let this sink in? What does (if anything)?

Nothing really sinks in ever. We haven’t really had time to emotionally process a lot of the good news because once something happens, we shift our focus to what’s next. We’re trying to be better about taking pictures and savoring every day, though. If things won’t sink in we have to at least give them a second chance by having a photo album or something.

Having made its way around the airwaves, fun. has had numerous late night appearances. From performances on David Letterman to Saturday Night Live, you must have had some big-name run-ins. When have you been the most star-struck?

In general I do okay with talking to people, I actually get more nervous when I have to do everyday stuff like share an elevator with someone. But I met Gwen Stefani the other day and that definitely made me a little star-struck.

Your band has toured with Jack’s Mannequin, Paramore, Relient K and Panic!. Who is your favorite band to play/hang out with on tour?

Most bands we tour with are very pleasant and great to be around. I love all the bands you named and we would be thrilled to tour with any of them again. Lately the only band we want to take out with us is Miniature Tigers though, we love their music, and they’re good friends of ours.

The last rock band to have a number one song with Billboard is Nickelback. Do you feel any kind of honor or anxiety regarding this achievement? What was it like dethroning Nickelback?

I think it’s a big honor. I really like the fact that music made by a band can still reach number one. I’m all for solo artists of any genre, but I think it’s neat that we’re a band that writes our own songs and that that sort of process can still reach the top of the charts.

You’re a jack of many instrumental trades, which do you feel the strongest connection with?

I feel most connected to the piano. It’s just such a complete instrument, laid out in a way that logically makes sense to me, it just feels very natural to sit down and play.

What kind of performance experience did you have while attending Central Michigan? Where did you play in Mount Pleasant or other local venues?

There were lots of great venues. There were shows in a space next to New Moon Records, shows right in the record store, shows in a kind of multi-purpose foundation room, basically any space that would allow it. I think pretty much every weekend we were either playing a show or attending something.

How would you describe your experience with your former Mount Pleasant band, Anathallo?

One of the most formative, important times of my life. It was very collaborative, lots of mutual respect, lots of pushing each other, lots of growth.

How long have you been a musician?

The first time I remember writing a song was at about age five on a tiny white Casio keyboard. I don’t think I really got serious about it until about 6th grade though, when the Beatles were all I could think about. I wanted to know how to play every song, every instrument and worked very hard to learn as much as I could.

What inspires you most to write and play? A person, emotion, goal, experience?

It can be anything. Movies, snowstorms, other songs, really anything. For me at least, it’s important to work every day to seek that inspiration out. I can’t wait for an idea to strike me, because I’ll be waiting for years. I have to sit at the piano and play. I have to read, I have to talk to people, I have to hunt inspiration ruthlessly. I make a point of treating creativity like a more “normal” job – do it every day, work hard at it, be meticulous, know your skills, know your limitations and make them work for you – those things all apply to art for me.

You’ve even written a musical, does this mean there is a broad future for you in Hollywood? A screenwriter, perhaps?

I want to score films. I also have ideas for other musicals and for movies. Hopefully I’ll have time to really dig into everything over the next few years. But in the meantime I’m enjoying music.

What advice do you have for amateur college-aged musicians?

Probably the same advice they’ve read a million times already. But it’s all true – be yourself. Work hard. Believe that what you’re doing is worth the effort. And also don’t forget to learn in school too, because even if you make it as a musician, you’ll still want the skills you can acquire in college.

You’re familiar with Mount Pleasant, its pluses and minuses. So, while you were attending school what was your favorite weekend destination? (It’s okay to say Wayside, no judgment on this end).

We usually used weekends to play shows either in Mount Pleasant or in Lansing, Detroit, Flint, etc. Aside from that, my friends and I used to go to The Bird once in a while.

What was your degree in? Why did you decide to take your schooling in that route?

I studied Journalism, Advertising specifically. I sort of fell into it as a result of liking the subject matter and professor of an intro class.  I got more interested in it the further I went, so it just happened naturally. I’m really glad it worked out the way it did, I still apply a lot of the skills I picked up there, whether in design, in how to edit, photography, etc. I’m grateful for the education I got and grateful to my parents for convincing me to graduate and not jump straight into music.

Did you ever envision yourself ending up in this situation? Why or why not?

I think I did, but only when I was really young. As a kid, when you see people on TV playing music, you assume that everybody in a band instantly is successful, rich, powerful, etc. When you grow up a little you realize that it doesn’t really work that way. So I think about by the time I was 18, I had given up on my dreams of the Ed Sullivan show. But I was still very happy with the way things were a few years ago – I was still playing music as a career, we were gradually accumulating really wonderful fans, and it was great. We couldn’t have predicted this past year.

Is there anything else you’d like to say to CMU students, fans or musicians?

CMU is a great place, and it’s great because of the attitudes and positivity people can bring there. There’s an amazing exchange of ideas, creativity and life that happens on campus and I’m grateful to have been able to experience it.