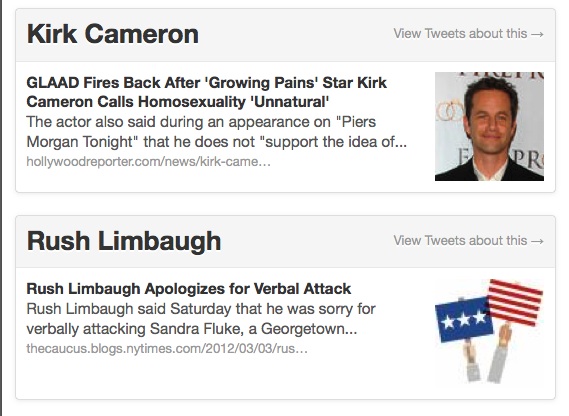 Partisan political rhetoric is fast becoming as American an addiction as oil.  Discourse between sides has steadily been devolving into a UFC cage match of ideologies; that’s nothing new.   The events of the day, ever-muddled by endless bickering and little resolution, are rarely reported without spin.

Spin steers the discussion.  It was once the news media’s job to make sense of the politician’s spin, to cut to “the facts” — an impossibility to be sure, but a noble pursuit.  It now seems that the media exists simply to place another layer of spin; to contrive an already vague message even further until viewers must simply go with what they agree with.  Such is life in a two party system.

Recently, with the one-two punch of Rush Limbaugh’s “slut” remarks and Kirk Cameron’s anti-gay ones, you can see the spin machine at work on both sides, neither of which seem to want anything to do with Cambaugh.  Piers Morgan sat in almost-stunned silence as Cameron talked about how he would sit his son down and give him a talking to if he found out he was gay.  The New Yorker and other left-leaning publications lashed out in unison at Limbaugh’s bating remarks about birth control.

The only shred of fact that we seem to have gotten out of these two incidents is that Rush Limbaugh called an Ivy League scholar a slut and that Kirk Cameron believes homosexuality is immoral.  These two relatively straightforward statements were of course bound to inspire backlash (Limbaugh does do that for a living).  It’s as if those remarks were hyped up just to give Americans something to talk about.

It also appears that that heightened sense of debate is infiltrating the election cycle as well.  You’d never know that Rick Santorum, Newt Gingrich, Ron Paul and Mitt Romney were fighting for delegates to secure the presidential nomination by looking at the news stations.  Instead, it appears an endless battle to not only one-up their fellow nominees, but shake their heads in dismay at the state of America under President Obama.  The inner workings of the election process is substituted for increasingly startling statements about mostly moral-based issues.

Of course, the moral debates amid issues like abortion and homosexuality has often been front and center in recent American elections.  George W. Bush rode into the White House on a tidal wave of Born Again support; Barack Obama was pushed in on the strength of his progressive youth appeal as well as America’s Bush fatigue.  That is a rather basic framework of those long-winded election cycles, but that is the point.  Election cycles in America used to seem like year-long Oscar campaigns, with mediocre nominees bidding for attention while other talents are left in the dust because they lack mass appeal.

This election cycle marks a curious turn from mass appeal toward niche audiences.  Rick Santorum targets the most intense sects of the religious right, Mitt Romney and Newt Gingrich the business-first free marketers and Ron Paul the liberty crusaders.  The problem with this is, of course, that you need more than a small niche to win an election in America.  So while the airwaves concern themselves with the extreme statements of the moment, rational discourse takes a back seat.  Instead of a marketplace of ideas, we are transforming into a flea market of recycled outrage.

Controversy is fast becoming substitute for substance, and it’s not just found in extremist conservative rhetoric and the liberal response.  More often than ever Fox News and MSNBC preach to their respective choirs, telling them what to think instead of simply reporting what happened.  Network news fails to keep up with the breakneck pace of the online news realm, and instead of offering in-depth looks at print stories they simply rehash them and supplement national coverage with some “interesting” local tidbits.

The news industry, in what was supposed to be a never-ending battle between ad revenue and hard-hitting news, has given up on the latter.  People seem to no longer want that, so the market has shifted and the stories have followed suit.  As tornadoes rage in the Midwest amid escalating gas prices and journalists meet their end in Syria, we’d really rather see Whitney Houston’s toxicology report and debate whether it’s worth lowering the flag for her, or look at Snooki’s pregnancy and wag our collective finger at her.  News is created with prepackaged opinions — from the Casey Anthony debacle to the aforementioned Cambaugh remarks.  None of it solves the economic crisis, but it sells.