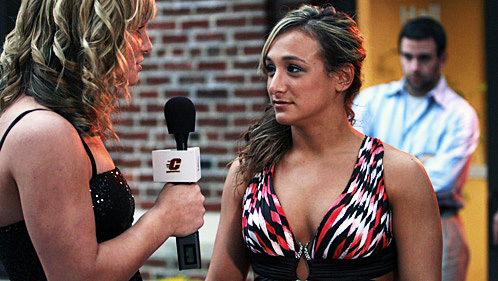 The 2010 CHIPYS raised plenty of spirits and nearly $2,000 for cancer research on Sunday at Plachta Auditorium on the campus of Central Michigan University.

The CHIPYS were created by broadcast redshirt junior Sam Russell and entrepreneurship redshirt sophomore Reid Rooney, both of which play for Central’s baseball team. Six hundred people attended the event and all proceeds from the CHIPYS went to the Jimmy V Foundation.

Russell and Grand Central’s own Brendan Emmett, a broadcast senior, hosted the show and partook in several skits and song parodies. One of the skits included Central’s freshman basketball player Trey Zeigler, in a parody of LeBron James’ hour-long special titled “The Decision.”

Twelve awards were handed out throughout the evening including Female and Male Athletes of the Year, Coach of the Year, Team of the Year as well as a slew of others.

Katie Simon, former member of the Central gymnastics team, received Female Athlete of the Year and Dan LeFevour received Male Athlete of the Year. Both were unable to attend but Simon was able to send her acceptance speech via video and former Central teammate Colin Miller called LeFevour on his cell phone to verbally accept his award.

Central baseball coach Steve Jaksa was honored as Coach of the Year and spoke highly of both the event and his players who created and promoted the CHIPYS.

“When (Sam and Reid) came to me early this summer I said I would do anything I could to support them,” Jaksa said. “It shows the character we have in student athletes, that’s what this is all about. For them to take the lead and make a celebratory thing like (this), I think it’s just absolutely outstanding.”

The wrestling team received the Team of the Year award at the CHIPYS; head coach Tom Borrelli accepted the award on behalf of his team. Borrelli said the win said a lot about both his team’s performance as well as the community’s awareness of that performance despite being less popular than football, which was also up for the award.

“We’ve been a Top 15 team nationally for the last four, five, six years,” Borrelli said. “I know we finished 12th last year with three All-Americans. I think people recognize that, they recognize when your team is ranked high nationally.

“To us, I don’t want this to come across the wrong way but winning a conference championship isn’t the ultimate goal, to us we’d like to win a national championship and bring home national trophies. I’m hoping a lot of our other teams aspire to those things.”

As stated previously all proceeds of the event went to The Jimmy V Foundation which was founded by ESPN and the late Jim Valvano, who succumbed to metastatic cancer shortly after the organization was created.

Since 1993 the foundation has raised over $100 million for cancer research and awarded cancer research grants in 38 states and the District of Columbia. Valvano’s passionate and inspirational speech after receiving the Arthur Ashe Award for Courage at the first sports award show – the ESPYS – stands as a lasting memory and moment of audacity for cancer victims and survivors.

During the speech Valvano asked those with cancer to “never give up” and that sentiment was echoed by student athletes, coaches, and administration alike throughout the evening.