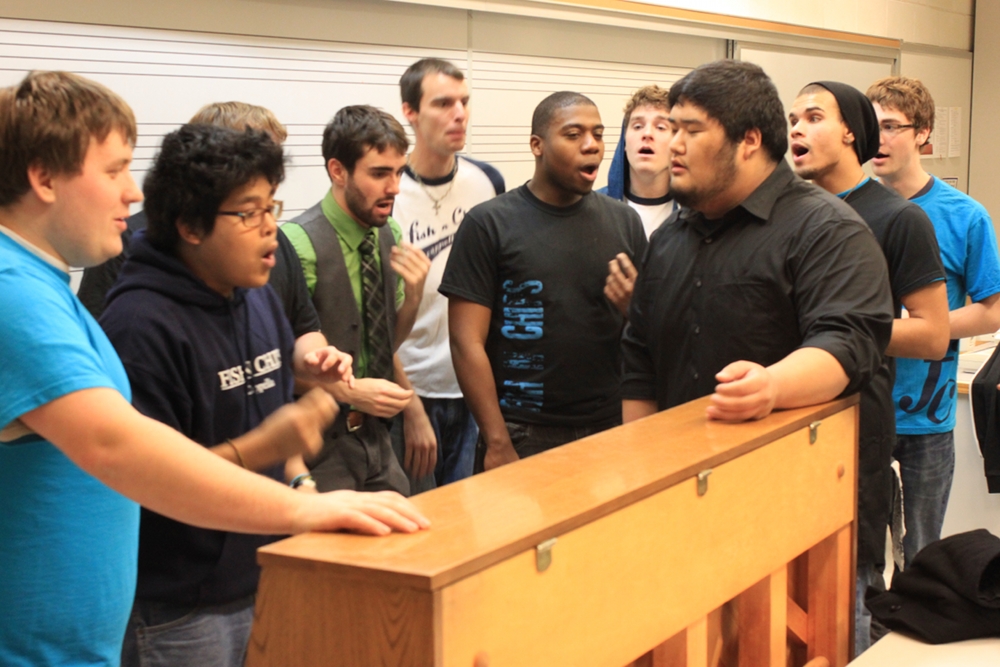 Fish N’ Chips is not a new English-style cafe in town, nor a fishing/gambling club sponsored by Soaring Eagle — it’s a well-seasoned men’s choir that has been pleasing Central Michigan University’s campus ears for a decade.

Fish N’ Chips is an a cappella act composed of some of CMU’s  most talented male singers. Created back in 2002 by some talented musicians, Fish N’ Chips has entertained audiences for nearly 10 years, and they are not slowing down.

The 14-piece group holds concerts every winter and spring that are always performed in front of packed audiences at the Broadway Theatre in downtown Mt. Pleasant. Listeners can expect to hear a variety of genres including pop, oldies and R & B among many others. Their stage favorites include versions of “Breakeven” by The Script, “One Day” by Matisyahu and a crowd favorite, “Cecilia,” by Simon and Garfunkel.

In addition to their fall and winter concerts, Fish N’ Chips has performed around the state.

“We mostly perform around Mt. Pleasant doing small gigs and performing in the dorms,” President and Music Director of Fish N’ Chips Mariano Sison said. “We’ve also performed at other places around the state including Grand Valley, University of Michigan and Michigan State.”

The members of Fish N’ Chips come from some pretty diverse backgrounds. Some have been in previous choirs — others just like to sing.

“There are some theater kids, and some who grew up singing Gospel in church,” Sison said. “Then there are just random singers and some choir guys too.”

When all of these talented singers are put together, they make a unique, beautiful and smooth sound — one that may not be heard anywhere else. Fish N’ Chips remains unique among singing groups by being an a cappella, and for being responsible for the majority of their own arrangements.

“Most of the time I just listen to the song and try to pick parts out like the different chords,” Sison said. “Then I work from there with the different parts.”

After finishing the arrangements, the group will practice about three times a week where they will learn their different parts and prepare for upcoming shows and concerts.

In addition to vocal prowess, Fish N’ Chips also boasts a talented beat boxer and bass singer. His name is Nathan Heath. Heath makes the sound of drums and other percussion vocally, which adds that extra something that really makes Fish N’ Chips enjoyable to hear.

There is never a dull moment with this group of guys. Fish N’ Chips’ dynamic presence will have audiences silently sitting on the edge of their seats, and the next song laughing, clapping or singing along.

“It’s a fun time,” Sison said. “The concerts are family oriented, and there have been lots of positive reviews. It’s just a bunch of guys singing and having a good time.”

Fish N’ Chips will be performing a Christmas concert in Howell, and will be opening for another group at Grand Valley State University.

Open auditions for the group are held at the beginning of every semester. Audition information will be posted on the Fish N’ Chips Facebook page.