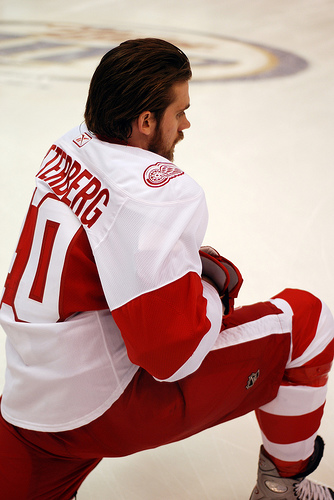 With just six games remaining in the regular season, the Detroit Red Wings are dialing in their roster, making final tweaks for the playoffs and getting ready for games that for 20 consecutive seasons have been all that matters for the men in red and white.

The defense is strong, the goaltending, assuming Jimmy Howard’s recent injury is minor, is solid if not stellar. For the first time in recent memory, the biggest roster concern is not only forwards but in fact two of the teams top three centers.

Henrik Zetterberg often the heart and soul of the forward unit in the postseason, is coming off an ugly stretch. With only seven points in the month of March, his offensive production has been lacking immensely.

Valterri Filppula, who missed a large part of Feb. due to injury, has not produced since his return either, mustering a paltry six points since his return on Feb. 26. Zetterberg and Filppula are both counted on to create offense for their linemates and both are going to need to find their touch immediately if the Red Wings hope to return to the Stanley Cup Finals for the third time in four years.

Most surprising of the slumping forwards is Mr. March himself, Johan Franzen. Franzen after an incredible five-goal game at the beginning of Feb., has just one goal in 21 games played, a stretch so troubling that the winger has even been a healthy scratch more than once. Over the last three years in the month of March, Franzen has had 12, 14 and 17 points, so his five points this month is cause for extreme concern.

Franzen has been an essential piece of any playoff success the Red Wings have had of late and the 11-year contract he signed after the 2009 season concluded indicates that it’s very important he continues with that kind of playoff performance. His performance and those of Filppula and Zetterberg, are key to Detroit’s success as the Red Wings round out the season and set their eyes on a 12th Stanley Cup.