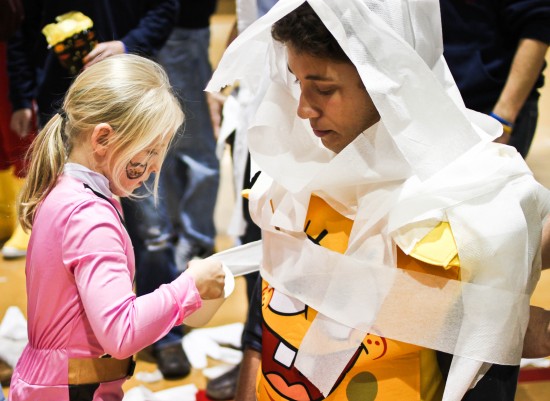 The sororities and fraternities of Central Michigan University gathered together Monday night to host the first-ever Finch Fright Night.

Fright Night, an event put on by Central’s 11 sororities and nine fraternities, was put together as a way for families to come have fun and engage in Halloween-themed activities at a safe location. The event lasted from 6 p.m. to 8 p.m., which is the time that trick-or-treating usually takes place. Activities at Fright Night included face painting, “Wrap your Mummy” and “Doughnut on a String.”

This is the first year that the Greek community has held the Finch Fright Night. Sarah Kaliszewski, a member of Delta Phi Epsilon, says that the event was brought inside for the safety of the children.

“They moved this event to Finch Fieldhouse because it’s safer for kids to come in here and have fun than it is to have them going from house to house,” Kaliszewski said. “It’s too dark outside to have kids walking down the street.”

While this event isn’t a traditional activity for Halloween, parents were more than willing to bring their kids to Fright Night. Suerka Almeida, a Mount Pleasant resident, says that she brought her kids to Finch because trick-or-treating is starting to get old.

“It’s boring to always bring the kids around to houses,” Almeida said. “Fright Night has activities for the kids, which is more exciting than simply trick-or-treating.”

More than 2,600 fliers were sent out in Friday Folders at the local elementary schools to advertise the event. Kyah Dubah, an Alpha Sigma Tau member and vice president of events for the Panhellenic Council, was in charge of putting Finch Fright Night together.

“A lot of details went into putting the event together,” Dubah said. “I had to reserve Finch (Fieldhouse), get the balloons and put together a playlist.”

There is no definite number of how many people were in attendance, although more than 400 people had walked through the stations before the event was halfway over.

It is likely that Finch Fright Night will take place on Halloween again next year due to its large success. Parents seemed abundantly pleased with the event and were surprised with how much fun their kids were having. Mount Pleasant resident Tony Haput said that he had never heard of the event before but was very thrilled with the experience.

“I heard about Fright Night through my girlfriend and we were looking for something fun to do with the kids so we brought them here,” Haput said. “So far it’s a lot of fun and it’s a great event.”