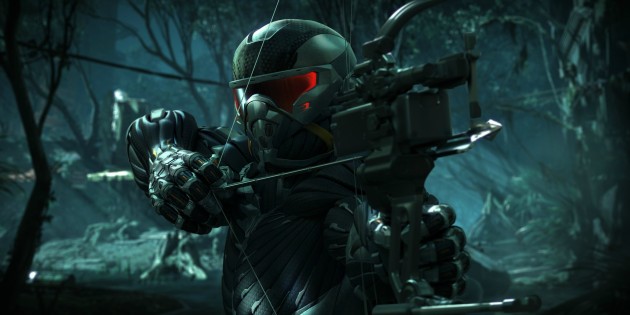 “Crysis 3” is a gorgeous game and being able to customize a player’s gun simply by holding “select” is completely ingenious. Now that we’ve gotten all of the highlights out of the way, let’s get down to brass tacks.

In “Crysis 3” gamers play as Prophet, a man in a nano-suit that gives him extra strength, armor and the ability to turn invisible. Along with his allies, he must break the Cell Corporation’s control of all mankind and prevent aliens from taking over the earth. Standard video game fare.

Players will not find anything new in the story, nor will the characters provide any surprises. To the game’s credit, they are believable, just not memorable. Prophet is a bland, empty husk with no real identity; he doesn’t have any recognizable personality traits and since the camera is stuck in first person, it’s impossible to give him an identity.

These boring characters go well with the boring gameplay. Prophet has the ability to turn invisible and when he does, the game turns from first person shooter to first person stealth. Why bother shooting when sneaking past them unseen and unharmed is so much more efficient? In “Crysis 3,” ignoring enemies is just as valid a tactic as killing them and doesn’t waste as much energy or ammo. “Why do I even have a gun?” is a valid question that became haunting after a certain boss battle.

I had been killed five times fighting one slow, lumbering boss not dissimilar from the “Hunters” in the “Halo” franchise. He’d kill me quickly if I was in the open for too long, so I resorted to a strategy that consisted of this: shoot for three seconds, turn on invisibility and run around and shoot from behind, repeat as necessary. After spending 10 minutes wasting all of my grenades and ammo, the boss finally fell. It wasn’t until I reached the exit of this zone that I realized the exit was always open and I could’ve run right past him and not even bothered fighting him.

Once again, “Why do I even have a gun?” Especially when players have the most deadly, overpowered weapon in the game: the bow.

“Crysis 3” is hardcore sci-fi. It takes place in 2047 where weaponry is obviously as advanced and futuristic as the suit Prophet is wearing, so it makes sense that the most deadly and efficient killing mechanism is a stick with a string. After all, it’s only been a few hundred years since the bow was replaced by firearms and it feels like bows were just about due for a comeback. If players shoot an arrow while invisible they are able to stay invisible (a perk not afforded to any other weapon). With this clearly unbalanced combination, it only makes perfect sense to make the bow a one-hit-kill weapon and capable of killing a rhino in one shot.

Sarcasm aside, it just seems crazy for Crytek to put such emphasis on the bow. There are lots of sci-fi shooters with completely unique and iconic weapons- “Half-Life’s “gravity gun, “Portal’s” portal gun, “Shadow Complex’s” foam gun. Instead of creating a weapon deserving to be on the box art, Crytek went with a weapon already used in other, better games a decade past their prime.

“Crysis 3” just feels old and familiar. It takes a little from here, a little from there and will leave players left feeling like they’ve been here before and done this already. It’s a forgettable experience that would have been excellent 10 years ago but nowadays is just the filler between more memorable games.