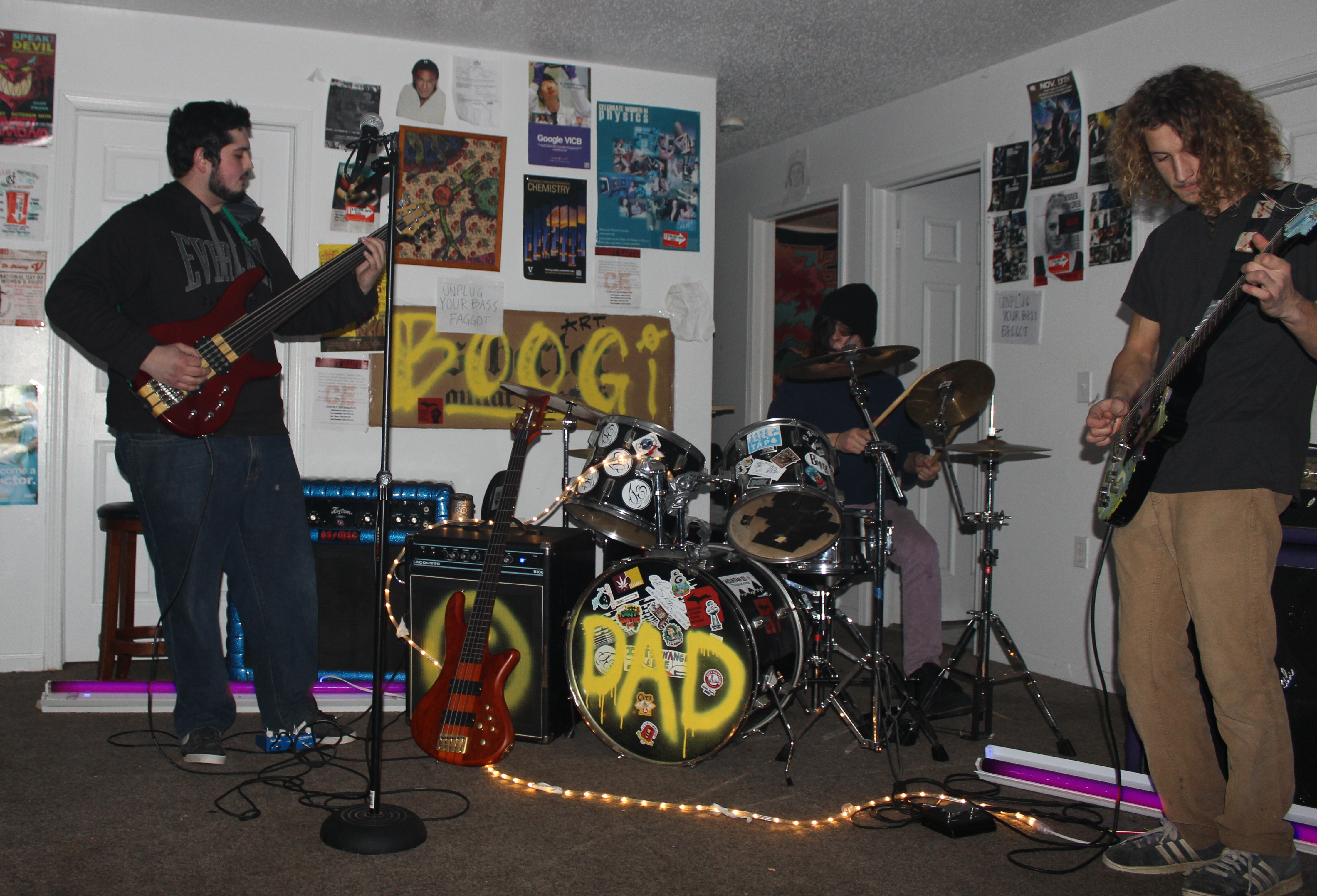 Packed in tight like a can of sardines, the roar of the crowd intensifies as the headlining band finishes off its last song of the set.

The masses of people are covered in sweat and beer after moshing, crowd-surfing and giving the band their unwavering support. The set may be over, but there is still an aura of excitement in the air.

Suddenly, the steady chant of “encore” begins, and the band accepts the invitation, playing one more song to give the people what they desire.

This atmosphere may appear to be something out of an Arctic Monkeys concert at Joe Louis Arena or a Radiohead show at DTE Energy Music Theatre. Actually, its happening in a small townhouse right off of Central Michigan University’s campus.

“I like supporting the local music scene around Mount Pleasant and Michigan in general,” said Chelsea junior Ashley Tisdale about the shows that have been hosted at her house on Franklin Street over the past year.

Tisdale and her roommates began hosting shows this past summer, when they arranged for a few of their friends’ bands to play at their place during the July 4 holiday weekend. There was a large turnout and the event was met with positive feedback, so they have continued the trend and aim to host one show every month.

“House shows are a lot different than concerts because (they’re) really personal and you’re right there with the band,” Tisdale said.

Some of the bands that have made their way over to the 906 Franklin St. venue include Interchangeable Dad, Crud Spider, Cardboard Swords, Bad Television and Trace of Lime. Some of these bands are local, while others come from other areas of Michigan, like Grand Rapids and Metro Detroit.

One of the better known acts that draws crowds to Tisdale’s house is Moses.

Tim Barrett, a recent graduate of CMU and guitarist for Moses, started doing house shows with his high school band. He was inspired by do-it-yourself bands that would book their own tours and play house shows during their travels throughout the Midwest.

“When I came to college, I was starting bands immediately and I knew that’s what I wanted to do,” Barrett said.

During the first house show he performed at, Barrett recalls playing in a house crammed with more than 40 people on the second floor.

“They couldn’t even fit everyone in, so people were on the stairs of this place,” Barrett said.

The chaotic nature of the venue resulted in several people crowd-surfing a room with low ceilings, the owners throwing themselves through their own walls.

While it sounds intense, this perfectly exemplifies the raw energy of a house show.

Troy senior Amy Sleboda has been going to house shows for the past couple of years and enjoys supporting local talent.

“There are so many talented musicians at this school and they deserve a lot of credit,” Sleboda said. “Dancing to top 40 hits at bars gets old. Seeing raw talent doesn’t.”

Sleboda said house shows have a more intimate setting as opposed to a venue that fits thousands of people. Barrett agrees, saying there’s a stronger intimacy when playing on the same floor as the crowd rather than being on top of a stage.

“I like how you can be sweating and have beer poured on you since you’re that close to the crowd,” Barrett said. “That part is really cool.”

Tisdale is continuing to organize events and to search for more local and Michigan-based bands to host at her house.

“Eventually, I want to work for a venue or record label,” Tisdale said. “This kind of thing is giving me good experience for that kind of work.”

The excitement surrounding house shows in Mount Pleasant has spread, and other students have been hosting shows at their places, too. Barrett said that house shows have come a long way since his first year at CMU.

“When I got here freshman year, house shows weren’t really a thing,” Barrett said. “Since then, it’s been something I’ve made a point to do. It’s just good that it’s really happening right now.”