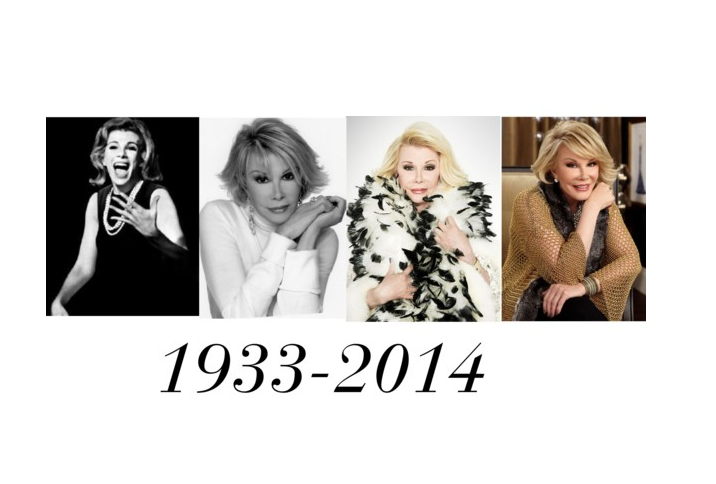 On Sept. 4, the world lost not only a comedian, but a fashion icon.

Joan Rivers was known for just about everything – from becoming the first woman to host a late night television show to helping create and host “Live From the Red Carpet” for E! Network and “Fashion Police.”

Rivers was one of a kind. Along with TV and comedy, she was also a best-selling author, Emmy award winner, producer, mother and grandmother.  She had a reality show with her daughter, Melissa, titled, “Joan and Melissa: Joan Knows Best?” and had a fashion line with Quality, Value, Convenience (QVC) network.

“Fashion Police” is a show that many viewers looked forward to each week, especially after each award show. Along with Giuliana Rancic, Kelly Osbourne and George Kotsiopoulos, Rivers would go through the best and worst dressed stars of the week. Watching award shows and seeing some of the more interesting outfits and anticipating what Rivers would say is something many people looked forward to.

It seems everyone who knew Rivers only had good things to say about her. Yes, she told it like it was, but that’s what made her so relatable – and likable – to many people.

The best thing about Rivers is she didn’t care what others thought about her. Although sometimes critical about the fashion choices of others, she was light-hearted about it. She was accepting of everyone – well, maybe not their style choices.

With award shows coming up in a few months, it will be strange to not see the face of this classy lady on our TV screens. However, Rivers’ funny jokes and her successful career will continue to be something celebrated by those who adored her.

Rivers once said, “Thank God we’re living in a country where the sky’s the limit, the stores are open late and you can shop in bed thanks to television.” That’s something we can all relate to, especially today’s fashionistas.