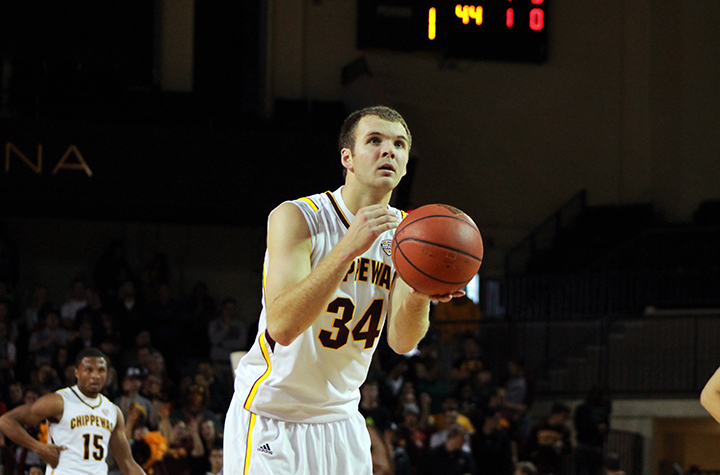 Central Michigan men’s basketball team kicked off its regular season against Manchester with a  101-49 win on Friday, Nov. 8 at McGuirk Arena.

Sophomore forward John Simons led the team with a career-high 27 points and nine rebounds on 10 of 13 shooting from the field, including 3 of 5 from beyond the arc.

“I felt pretty fresh coming off the court today,” Simons said on Friday. “We were in good shape and well prepared to play for our first game.”

Coach Keno Davis said the overtime exhibition victory against Lake Superior State helped prepare the Chippewas for the upcoming season. Since the game, the team has practiced on having more discipline in its half court defense and being more aggressive on fast breaks.

Davis said Friday’s game showed what the team is capable of offensively, even despite the Chippewas’ struggles from the 3-point line.

“I think our guys have a lot of confidence in what they do offensively, and I think they’re only going to get better with shooting the ball and being able to finish on the inside,” Davis said. “We’re going to be a tough team to defend.”

Davis said Simons is building off his strong rookie campaign a year ago.

“Simons had a great freshman year and appeared to look comfortable in the position we placed him in,” Davis said.

Simons only needed 19 minutes for his 27 points and nine rebounds. Davis said Simons’ abilities create mismatches for the opposing defense.

“What he’s able to do on the court really leads to difficulties for the other team, on how they’re going to try to match up with the guy that can play out on the perimeter as well as inside,” Davis said.

During the offseason, Simons packed on more muscle to aid him down on the post. He said he knew getting bulked up would alter his shot, so shooting more jumpers became a priority.

Simons may have been the game’s leading scorer, but he gave credit to his teammates for distributing the ball well.

“I was just able to knock my shots down and get some easy buckets and transitions coming off of good passes from Rayshawn (Simmons) and Chris (Fowler),” Simons said.

“We knew we could do something like this, but it was good to show it for the first game and hopefully we can continue to do that,” Keel said.

Simons said Central knew it would have to defend the perimeter well coming in, as Manchester was thought to have been dangerous from beyond the arc.

“That was our first point of emphasis, closing out on every shooter because every single guy could shoot for them,” Simons said. “We watched some film from last year and even though four and five guys weren’t as big as normal four and five guys, they could step out and shoot.”

Manchester ended the game 19-of-56 from the field and 7-of-27 from behind the 3-point line. Central dominated both halves of the game defensively, amassing 17 steals. During the first half, Central had a seven-minute stretch where Manchester did not score a single point.

“That was huge for us because they came out playing well, knocking down some shots right away so when that stretch hit, I felt like we got a lot of energy from our student section,” Simons said.

Simons pointed to one moment in particular during the first half that the student section provided energy for Central. When Fowler passed to sophomore forward Blake Hibbitts for a dunk, it sent a ripple through the student section, as fans jumped out of their seats.

“From that point forward our intensity was just kind of turned up and we got a bunch of steals and a bunch of easy points,” Simons said. “Our energy was really high at that point.”

Central Michigan’s next game is against Bradley in Illinois on Tuesday, Nov. 12. The Chippewas will return to McGuirk Arena against Pepperdine on Saturday, Nov. 16.