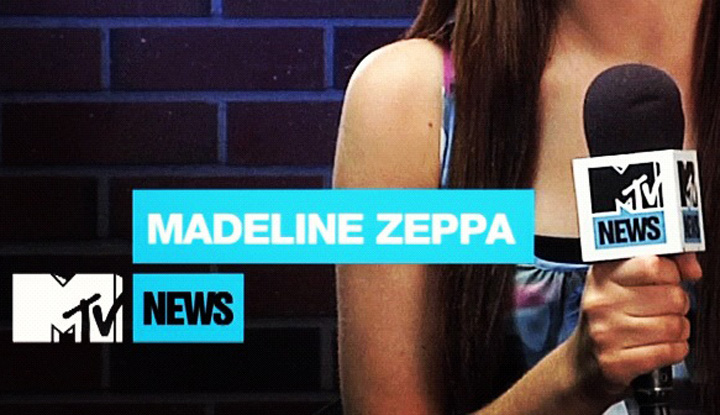 When the MTV Video Music Awards come to mind, many people think of a foam finger or even Miley Cyrus twerking, but many do not know the work involved in putting on such an enormous show. That cannot be said for senior Madeline Zeppa, who through an internship, gained first-hand experience in the production aspect of the show.

Zeppa was a production assistant at the 2012 MTV Video Music Awards, whose target demographic is young adults and adolescents. As a personal assistant, Zeppa helped with the pre-show, red carpet and interviews with celebrities.

“It was cool to be able to help out whenever production guys needed it,” Zeppa said.

Zeppa had been interested in production since she was young and started producing when she was 13 years old.

“I applied to all of the media sources out there, like TMZ, E! Network,” Zeppa said.  “I got offers back and ended up interning at both CBS and MTV at the same time.”

While interning, Zeppa gained valuable skills in production, including camera work and lighting for interviews and editing the footage collected.

“I know most people think it’s the coffee runs and stuff like that, but it really isn’t,” she said, laughing. “I worked through post-production and learned from one of the head guys who taught me a lot.”

Zeppa did not run into a lot of trouble learning new skills because of her extensive background in production and said the hardest part of the experience was being so far away from her parents and siblings.  Although, she did meet and work with some familiar faces, including pop sensation Katy Perry.

“A lot of people think that she would be a diva, but I’ve had great experiences with Katy Perry. She talks to everybody and keeps the mood light even if it is a stressful time,” Zeppa said.

Zeppa is a Broadcast and Cinematic Arts major at Central Michigan University and is grateful for the experience she gained while working at MTV’s Los Angeles and New York City headquarters.

“It’s really helped me prepare for life after college,” she said.  “I’ve grown so much from it.”

Zeppa also wrote articles for MTV’s website, focusing on the up-and-coming musicians and bands. She hopes to go into production after graduation and says her ultimate goal in this career field is to “make an impact in the industry.”

“I don’t doubt that you will hear about Madeline in the next couple of years,” she said.

Through her studies at Central, Zeppa gained even more valuable skills and encourages fellow broadcasting students to get involved to expand their skills.

“Most people are just going to work on what they want to do,” Zeppa said. “So if you go outside the box, you’ll have greater opportunities.”