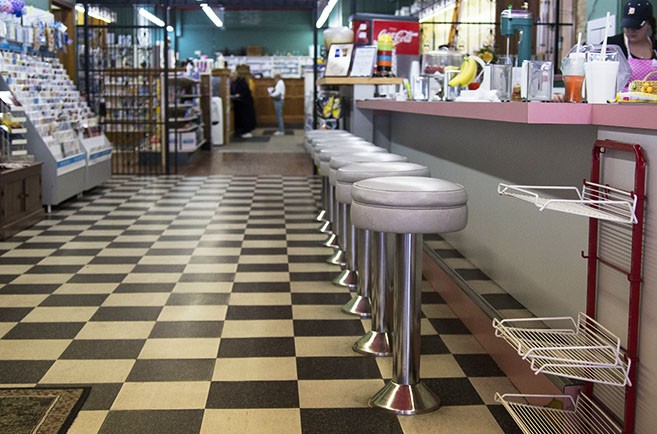 McCarthy’s Downtown Drugs Soda Shoppe offers a classic taste for those looking for a glimpse of the past.

The black and white tiled floors, the round stools that line the bar, and National Public Radio’s “All Things Considered,” quietly playing in the background all add to the antique charm of this establishment.

Snuggled between Jimmy John’s and Trillium in downtown Mount Pleasant, McCarthy’s is a local gem that often goes overlooked by non-residents.

The old-fashioned soda shop that leads into a pharmacy, offers a variety of flavors for shakes, malts and floats. McCarthy’s has both classic and unconventional flavors including chocolate, peanut butter, banana, pineapple and even mocha.

Three-year-old Mara Davis has been coming to McCarthy’s since she moved to Mount Pleasant a year ago. Mara and her five-year-old brother Brady Davis, try to come after school as often as their mother will allow.

“I like the light pink ice cream,” Mara said, referring to the strawberry flavor.

While Mara shows her enthusiasm for McCarthy’s in her fondness for strawberry ice cream and the bar swivel stools, Brady said that he loves all the toppings and candy options that are offered.

Lauren Makled, a two-year employee of McCarthy’s, said not only the ice cream reels customers in, but also the food and drinks.

“The Logan” is a favorite among regulars. It is almost exactly like a classic club sandwich that includes ham, turkey, bacon, lettuce, mayo and your choice of cheese.

With that said, Makled still falls back on the classic ice cream treats that are offered. Her favorite is the orange float.

But the real specialty of McCarthy’s is the phosphate soda. A phosphate was a popular drink in America up until the 1940s and is simply soda water with a choice of flavor.

Matt Mertz of Union Township brings his granddaughter on summer days to give her a unique cold treat experience. For new-comers, Mertz recommends any of the phosphate flavors, “to see what people used to drink.”

Mertz was a Central Michigan University student in the 1970s. He moved away after graduating but returned to the area in 2011 and has been coming to McCarthy’s ever since.

“You get to step back and see what soda fountains used to be like. It’s a taste of the past,” Mertz said.

Mertz said  it was a unique place that he could spend quality time with his family.

McCarthy’s Downtown Drugs Soda Shoppe is located at 121 E. Broadway St. It is open Monday through Friday, 9 a.m. to 5 p.m.