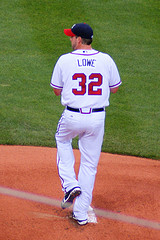 It could be argued there isn’t a more hopeful day annually in the world of sports. It’s Opening Day and every fan base in Major League Baseball is brimming with hope and anticipation.

Even here in the state of Michigan where the more than decade long economic downturn has many in what seems to be an endless rut. Fans are looking forward to not only seeing their beloved Detroit Tigers play but Michigan born players as well taking the field on baseball’s version of Easter Sunday.

Here’s a look at some of the better Michigan born players taking the field today and Friday:

Lowe is making his third straight Opening Day start for the Atlanta Braves this year and will oppose the Washington Nationals and Livan Hernandez. Lowe had a 16-12 record with a 4.00 ERA in 2010 and finished the season strong going 5-0 with an ERA of 1.17 in September.

Varitek had an injury plagued 2010 only playing in 39 games and hitting a meager .232 with seven homeruns and 16 RBI. He has been known more for his leadership and defensive prowess but last year anyway you cut it was a disappointment. At 38 (will be 39 on April 11), Varitek isn’t getting any younger but with two World Series rings and potentially the most talented team in Major League Baseball, this season should prove to be fairly successful. The Red Sox will play the Texas Rangers on Friday.

Putz had his first productive season in two years after a slew of injuries in 2008 & 2009. After hopping from Seattle to New York and finally to Chicago, Putz found a home in Arizona this season and finds himself filling the role of closer once again. After having 36 and 40 save seasons in 2006 and 2007, he has struggled to stay healthy but after last year’s successful stint with the White Sox as their set-up man Putz will get another chance to prove himself worthy of the most coveted relief role in baseball. The D-Backs play the Colorado Rockies on Friday night.

McLouth will hit second in Atlanta’s Opening Day lineup against the Nationals, after a strong showing in Spring Training. He hit .310 with an .863 on base percentage and will get another shot at playing center field everyday in 2011. McLouth struggled early in 2010 and was sent down to Triple-A but eventually was called up in Sept. where he batted .263 and played well enough in center to gain the confidence of his manager Fredi Gonzalez.