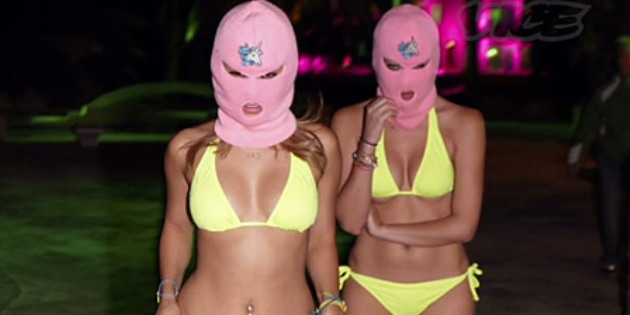 We are almost a fourth of the way done with this year and the movie industry hasn’t provided audiences with any real surprises. Well, the wait is over. “Spring Breakers” is here and it is a blast.

College friends Faith (Selena Gomez), Candy (Vanessa Hudgens), Brit (Ashley Benson) and Cotty (Rachel Korine) rob a restaurant in order to get money to go to Florida for spring break. While enjoying the hardcore party lifestyle of drugs and booze, they get arrested and put in jail. Alien (James Franco), a drug-dealing thug, bails them out and brings them into his crime-filled way of life.

It is important to note that this movie is best classified as a crime drama. It would have been an easy task making this movie another mindless party flick such as “Project X” or “21 & Over.” Instead, Harmony Korine constructed this movie in a more serious manner, with the emphasis on danger rather than fun. Even though there are some laughs and amusing moments, the overall tone of the movie is pretty dark.

Korine took four bikini beauties, gave them guns and placed them into a gritty world full of nudity, narcotics and weapons. Following these characters through their unpredictable journey and watching the mayhem that unravels has resulted in some of the best cinematic entertainment this year.

The four leads give very committed performances, even though their characters should have been better developed. Having said that, there are many internal conflicts that the characters go through, and these actresses succeed at conveying believable emotions on screen.

With a dirty Southern accent and his hair in cornrows, Franco shines as he completely immerses himself into Alien. Franco could have easily ruined this movie if he didn’t take his character seriously, but his dedication to the role is the reason why Alien works. He is not afraid to take his character to shocking limits that will cause audiences to gasp in disbelief.

The effective use of music complements events as they unfold onscreen. The opening scenes have Skrillex bumping hard during a montage of spring breakers partying on the beach. One of the movie’s most memorable moments is when Britney Spears’ song “Everytime” plays while Alien and the girls rob spring breakers with their guns blazing. To make things even better, the great Cliff Martinez composes another brilliant retro score that fits perfectly with Korine’s style.

The main problem with this movie is the repetitive overuse of dialogue. There are many lines of dialogue throughout the movie that get repeated and are also reinserted inserted in one of the many montage scenes. After a while, it becomes distracting and starts to take away from the movie.

“Spring Breakers” is now the frontrunner for guilty pleasure of the year. The collaboration of a unique, artistic vision with strong, devoted performances ultimately leads to a fresh, entertaining experience.