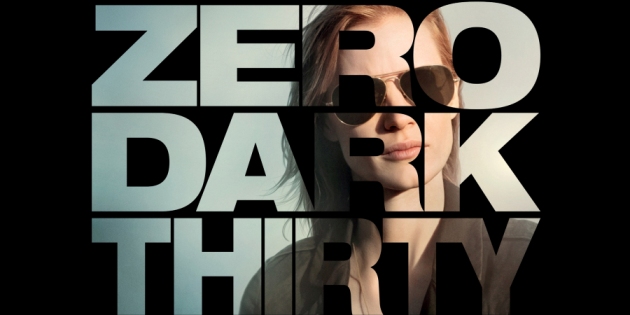 There she stood, alone, after years of research and hard work, watching two helicopters full of Navy Seals fly away to Abbottabad, Pakistan in hopes to find her notorious target.  This is “Zero Dark Thirty.”

The lone female at the center of Kathryn Bigelow’s latest film is CIA officer Maya (Jessica Chastain), whose dedication to hunting down Osama bin Laden was crucial to that infamous mission’s success. Many attacks and bombings in different parts of the world cause many casualties and are believed to be headed by bin Ladin, the infamous rogue terrorist. Maya and her team must quickly gather enough information to find bin Ladin and stop all of the brutal violence believed to orchestrated by him.

This is such a fantastic movie. Though the subject matter is very sensitive, the story is told in a very professional and entertaining manner. Each scene moves by very quickly and, consequently, a great amount of attention must be paid to dialogue and what is happening on screen. It may clock in at just under 160 minutes, but every scene is crucial.

Chastain delivers the best performance of her career. She effectively shows the evolution of her character who becomes more confident and mature as the movie progresses.  She recently won the Golden Globe for Best Actress – Drama, and there is a very strong possibility of her winning the Oscar for Best Actress.

She is assisted by an impressive supporting cast including Kyle Chandler, Jason Clarke, James Gandolfini and Chris Pratt. Each character has an important part to play, and are developed accordingly. The biggest surprise from the supporting cast is Clarke’s character, a CIA officer who tortures prisoners to get information out of them. He displays powerful moments of ruthless intensity, but has the ability to show a softer, sensitive side when the morality of it starts to get to him.

In 2009, Kathryn Bigelow became the first woman in history to win the Best Director Oscar for “The Hurt Locker.” She tackles this movie with the same passion that won her that Oscar.  The last 40 minutes of “Zero Dark Thirty” are where Bigelow showcases her astounding talent of constructing massive action sequences. She creates authentic feelings of suspense throughout the movie and is one of the best directors in the business.

The witty dialogue is one of the film’s finest aspects with lines that are incredibly powerful and unforgettable. This can be attributed to the Mark Boal’s script, who also wrote “The Hurt Locker.” Boal is dedicated and has shown that he will do what it takes to gather the information he needs to accurately dramatize real events into a fascinating screenplay.

“Zero Dark Thirty” is a captivating, fast-paced thrill ride. It successfully satisfies the curiosity of audiences through brilliant on-screen storytelling. This powerhouse movie has been a big player this awards season and has a great chance to gain more accolades on Oscar night with its five nominations.