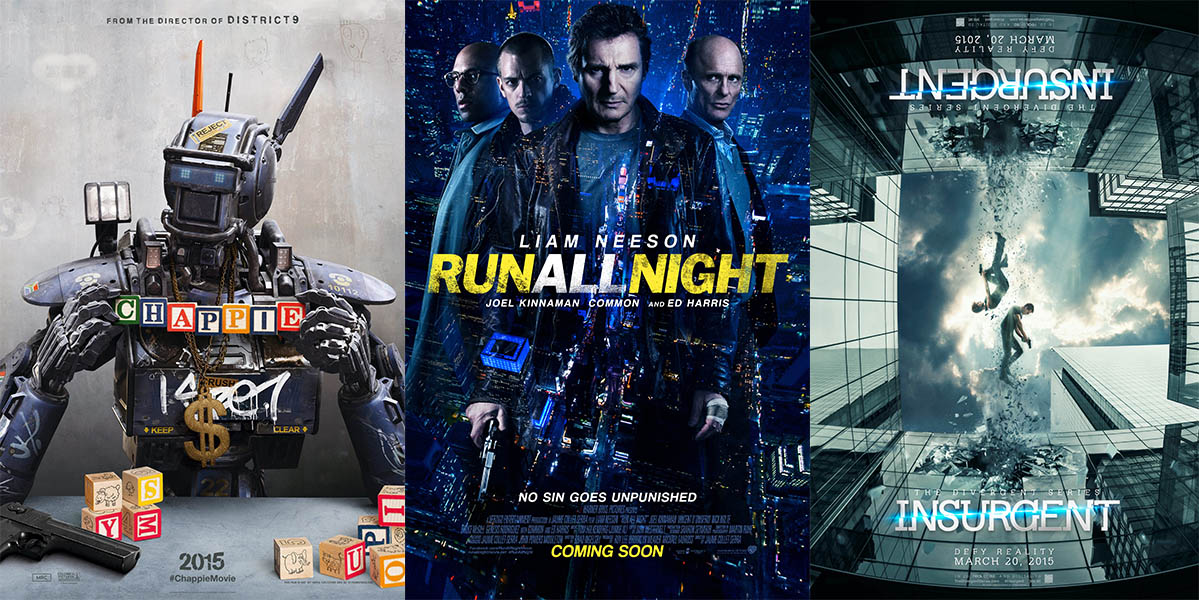 With the Academy Awards officially out of the way for another 11 months, the 2015 movie season can finally kick off.

While the year’s biggest films like “Avengers: Age of Ultron” and “Jurassic World” are still quite far over the horizon, the coming month holds a fair amount of surprising gems for people of all tastes.

Plot: In a not-so-distant future, much of the planet’s armed forces are replaced by an oppressive, corporation-run, robotic police force. When a young engineer named Deon (Dev Patel of “Slumdog Millionaire“) captures and reprograms one of these robots to think for itself, many different factions race to claim this being for their own purposes. Among them is Vincent Moore (Hugh Jackman), a disgruntled former soldier with a hatred for artificial intelligence.

Buzz: Neill Blomkamp has solidified himself in the eyes of many film fans as one of the premier makers of smart science-fiction. His two previous well-known films include “District 9” and “Elysium,” both offering the most perfect blend of high-minded political commentary and thrilling sci-fi action. While some fans denounced “Elysium” for its heavier focus on “Hollywoodized” action, “Chappie” is in many ways a return-to-form for Blomkamp. It’s an adaptation of his own acclaimed 2004 short film “Tetra Vaal,” and it marks the return of “District 9” screenwriter Terri Tatchell (who was absent from “Elysium”).

Plot: In a live-action retelling of the classic fairy tale of “Cinderella,” a young woman (Lily James) is given the chance to escape a life of servitude under her wicked stepmother (Cate Blanchett) after she falls in love with a charming prince (Richard Madden).

Buzz: Last year’s acclaimed musical, “Into the Woods,” proved that the public can appreciate Disney’s efforts to make enjoyable live-action films. The movie will also benefit from being under the competent direction of Kenneth Branagh, who, despite being known best for his portrayal of Gilderoy Lockhart in the second Harry Potter film, has established himself as a very talented director when it comes to filming epic, Shakespearean-style fantasy films (as shown by his adaptations of “Hamlet” and “Thor“).

Buzz: Liam Neeson has played the role of “unassuming old man reluctantly using his old skills to kick butt and/or protect his family” so many times that it’s basically its own genre. This film looks like it should fit nicely into that category of blockbusters.

Plot: After the events of the uprising in the first “Divergent” movie, Tris (Shailene Woodley) and her companion Four (Theo James) are on the move, fleeing the oppressive government forces that trace their every step while also gathering new rebellious allies.

Buzz: The “Divergent” series has already proved successful enough to  join the ranks of its fellow young adult novel adaptations like “The Hunger Games” and “Twilight,” so fans of the novels and movies alike will rejoice when the next installment races into theaters.

Plot: Ex-Special Forces operative Jim Terrier (Sean Penn) seeks to leave behind the life of morally-ambiguous black ops work that colors his past, but the military contractor (Javier Bardem) that he used to work for has other plans. This results in the kidnapping of his lover and leads to a violent tour across Europe as Terrier chases – and is chased by  – his former boss.

Buzz: With blockbuster action hits like “The Transporter” and “Taken” on his resume, director Pierre Morel has effectively carved his own niche into the field of crowd-pleasing films. With a great cast consisting of many talented character actors and action movie heavy-hitters (and Sean Penn), this may be this year’s earliest candidate for “sleeper hit” status.

Plot: When millionaire James King (Will Ferrell) is faced with jail time after being found guilty of fraud, he does what every white guy with his level of social awareness would do: ask the first black man he sees (which happens to be Darnell Lewis, played by Kevin Hart) to “harden him up” for his upcoming stint in the slammer.

Buzz: At this point, Will Ferrell is basically eternal royalty among comedy actors, and Kevin Hart is quickly becoming one of the most recognizable faces in American show business, so being paired together under writer/director Etan Cohen (whose previous work includes “Tropic Thunder” and “Idiocracy“) is close to guaranteeing this to be one of the year’s first hit comedies.