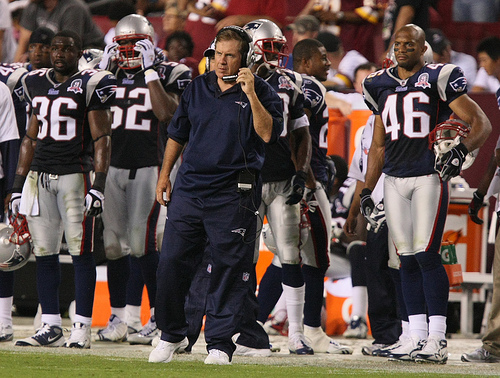 Day one of the NFL draft is complete, a day that featured quite the abundance of surprises.

The Minnesota Vikings and the Tennessee Titans shocked the world with their respective first picks. The Titans pick was in, Blaine Gabbert was still on the board and it seemed they had their franchise quarterback. Well they did but instead of Gabbert the Titans went with Washington quarterback Jake Locker. Locker was a projected top pick in last year’s draft but after returning for his senior year he had fallen down many draft boards, besides the Titans’ it seems.

Gabbert ended up going at pick 10 to the Jacksonville Jaguars in another surprise pick. It was a surprise because no one thought Gabbert would still be there. Jacksonville had to move up in the draft to get Gabbert with Washington, who was quite needy at the quarterback position themselves. For Washington to pass on Gabbert is the second biggest head scratcher of the draft. Donovan McNabb is on his way out in Washington and to say that Rex Grossman is their quarterback of the future would be quite the reach. Look for Washington to go out and get a signal caller on day two of the draft.

The biggest blunder for day one in my opinion is the fact that the Minnesota Vikings selected Christian Ponder with the 12th pick. I have searched many “expert” mock drafts and I can’t find one that has Ponder going in the first round, let alone the top 20. For the Vikings to not move down and select Ponder could really come back to haunt them. The only reason I can see this as being OK, is if the Vikings were truly afraid that another team would reach on Ponder before the end of day one. You can’t blame them for going and getting their guy but you can blame them for the way it was handled without making a move down happen.

The Detroit Lions ignored their major needs and did what they said they would do. They took the best available player on the board, Nick Fairley defensive tackle from Auburn, making it the second-year-in-a-row the Lions  selected an interior defensive lineman. Fairley dominated the SEC this year and was the defensive player of the game in the national championship. Putting Fairley next to Ndamukong Suh, Corey Williams and Kyle Vandenbosch is going to help the Lions and Fairley develop into one of the most talented defenses in the NFL.

At the end of day one, I give the New England Patriots the best grade of the first round, by not using both of their picks. New England added one of the best offensive tackles in the draft at pick 17 with Nate Solder from Colorado and traded their 28th pick to the New Orleans Saints for a second round pick this year and the Saints first round pick next year. New England is now looking at five picks on day two. Three in the second round and two in the third.

Really makes you think they know what they’re doing down there in New England.