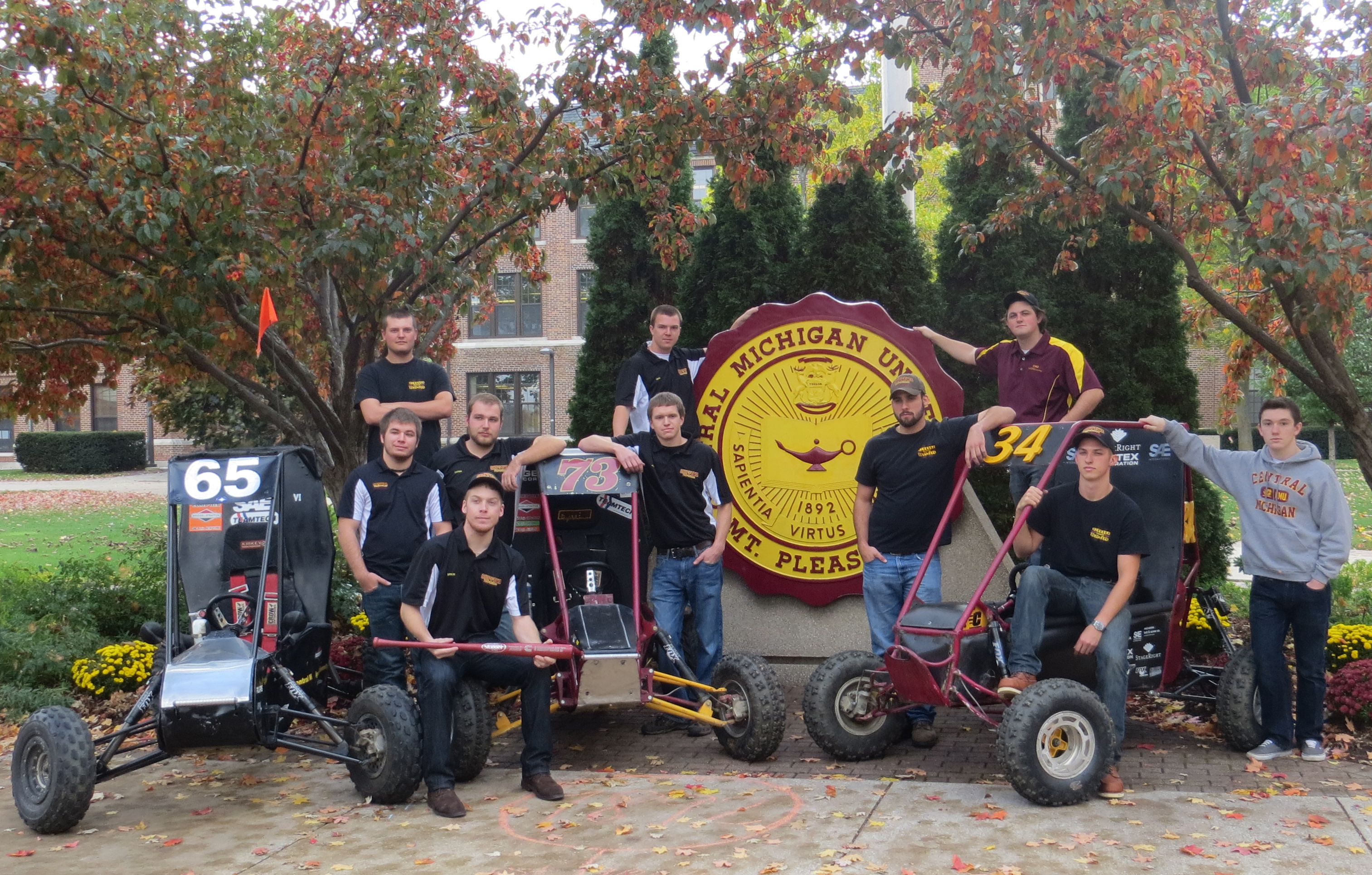 In room 139, located in the Engineering and Technology Building, pilot and Team Chippewa vice-president Grant Martino passes his hand through his thick dark hair and says ironically “My girlfriend is always upset when I stay here designing the car till 1 a.m.” Indeed, room 139 is a dimension far away from the college campus, even if you can clearly feel the Chippewa pride. That’s the kingdom of creativity and passion. A high steel net encloses the team’s workshop as if it was a fortress, while a loud and energetic rock music resonates in the room. Hammers, wrenches and screwdrivers seem to hold some mysterious power.

There are people from every walk of life; shy car-fixers who silently work engaged in their thoughts, self-confident “team veterans” who check the cars as if they knew them as the back of their hands, zealous newcomers who paint the bodyworks; you can feel their unyielding team-spirit. While you hear a mechanic symphony of clenches, bolts and hammerings, four letters welcomes the visit to this den: BAJA

Baja SAE is an annual intercollegiate worldwide competition about designing three own off-road vehicles (similar to dune buggies), building them and having endurance races that can last for four hours. And Team Chippewa, a group of around twenty CMU students bound all together by their love for cars, never miss the chance to join this intense challenge. “Everybody puts a part of himself in the car” explains Ian Eickholdt, treasurer and member of CMU Baja group, “that’s why we care to go there all together.”

This small but very energetic team collected several outstanding achievements during the last year’s car competitions, including ranking top 25 and achieving 2nd place at the race event in the Louisville Midnight Mayhem Race – one of the most important national Baja SAE competitions. “Everyone has its own task; we break up in professional teams, just like NASCAR crews” says Team Chippewa president Derek Donovan, a big bearded grizzlish guy with a composed but fierce presence, “and we just help each other if there are particular issues.” He carries on by saying that Baja is a nice experience to get your hands dirty and learn teamwork; it’s a good challenge for everyone who is fond of engineering and cars.

However, Baja group is not only practice, teamwork and experience, but mostly fun. All of the members are there because they enjoy manufacturing and crafting their own cars; you can find the same excitement that you had when you were playing Lego. Indeed, Ian confesses he loved to play it when he was a kid; that’s how he found his path.

Nevertheless, “We couldn’t be a team with one person missing” says Derek with his indigo eyes and his firm look. Eyes that are able to speak of friendship with the language of numbers and calculations. “However, we are a group that is always willing to accept new forces and minds. We just welcome everyone and give them tasks to do. They get involved in the team very quickly.” While he stopped for a moment, a newcomer appeared behind him; it was his first day. He seemed clumsy and shy at the first moment: stayed in a corner for some time, unsure where to go, keeping saying “I don’t know what I have to do.” After 10 minutes he was already at work, repainting a car with a bright smile on his round face.

“Togetherness” that’s the real principle of this group of friends, not coworkers. Tori Fracassi, the only girl of Team Chippewa, believes camaraderie best describes her team’s environment, “I would say that everyone becomes pretty close after long hours spent together and working together.” A team united with one love, cars, and one goal, have fun. There are no distinctions, you become an essential gear of a greater system, “I don’t expect them to act any differently because I am a girl, I joined the group for a reason and it wasn’t for them to change who they are.”

But what’s the secret for their success? “Don’t overcome with things, make it simple,” replies Derek, “keep trying and you’ll find the right formula.” This team doesn’t stick to much complicated plans or designs, they try to find balance with a particular mix of simplicity, passion, patience, fun and perseverance. Bringing changes to the cars, testing new designs and develop marketing campaigns are essential things, because many of the competitions are based on the judgement of car design and marketing presentations.

Hard work and constant effort shape the personality of these future young forces. However, part-time jobs, homework, college and other commitments are only few of the hardships with which these people deal with. Sometimes there are disagreements about the car design or other decisions, but even if they butt heads a lot, they always try to figure out the best; “That’s like being in a family, being brothers,” says candidly Derek, smiling for the first time.

A brotherhood sealed by their maroon and yellow cars with their hard-nosed steel frames, custom designed suspensions and big roaring engines 10hp Briggs and Stratton at the back. Entirely manufactured by Chippewa Team, the vehicles can reach an average speed of 30 miles per hour. These beauties of engineering and design are called “53”, “72” and “73”, each one with different features, settings and shapes.

However, what’s the sensation of driving a car like that during an intense race against more than one hundred challengers? Grant Martino says that’s one of the best experiences he ever had and time goes so fast that you can’t realize what’s really going on; only at the end you understand there was a huge competition with countless groups. “And obviously, you just look out for not breaking the car. You know, that’s expensive!” he adds with a smile. Most of the team, however, thinks their best experience they had was during one of the last year’s races; the frame broke and they had to fix it very quickly. Through an intense cooperation they achieved to repair it and they even reached a very good position. “That was hard, we had to work a lot, but we finally did it together as a team!” says Grant.

What makes really unique this incredible group is its people. Everyone, with its skills and its personalities, is different and irreplaceable. There are people who want to improve people’s life with good quality works as Grant and others who are still searching the right path as Ian. However, the common element is love for cars and engineering, which englobes the place as an alternative dimension, halfway between a dream and reality. “Everyone is here for fun and passion, it could be a sacrifice for others, but for us that’s life!” says team member Carson Salisbury.

Actually, these people enjoy so much what they do that they feel, at the same time, a sensation of accomplishment and sadness when they admire their brand new shining car. They miss the good old times spent together designing and building it, even if they are really excited for the incoming competitions.

The future shines bright for the growing Team Chippewa. After the last races of fall, the team will work on new designs and improvements. “I’ll be graduating next year and I’ll going to have a job, then. My task now is to leave a heritage here, some values that help to improve the team. We’re also scouting for new energies,” says Derek. He’ll leave his position and go to explore the outside world, but he feels deep inside his heart he’ll be forever part of Baja and his team.