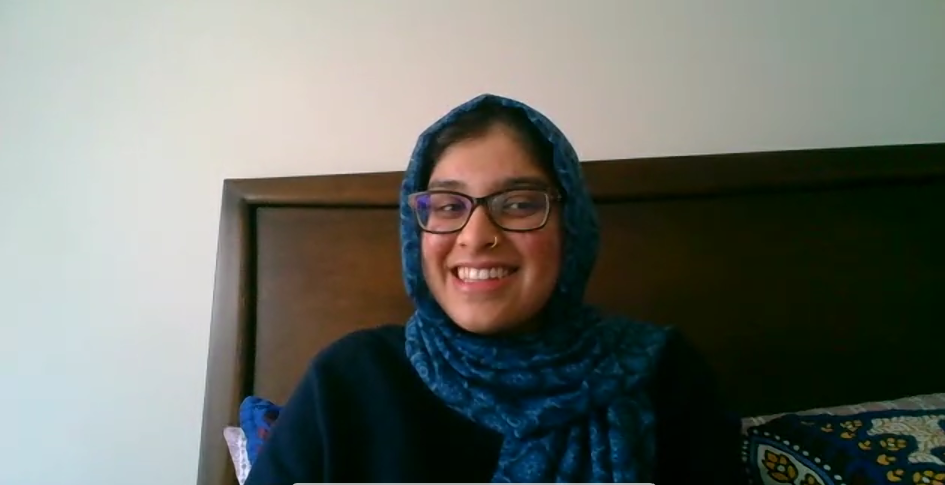 Story and photo by Emory Obarski

Graduation is celebrating the success of a journey of studying, self-discovery and determination in one final moment with many others who have been in a similar situation. COVID-19 has changed the way Central Michigan University celebrates graduation. Wanting to still give students their commencement, it has been moved online for the past ceremonies for May, August and November of 2020 graduates.

CMU graduate student Maham Khan looked forward to her May 2020 celebration and is now looking onto her May 2021 graduation.

“I think I made the decision the summer before my senior year,” Khan said.

Khan chose to do her master’s program in science administration to help her once she attends medical school. She says while health administration is different from her biomedical sciences degree, it will help her in the future when she becomes a physician to pursue better patient care.

Khan says it felt weird to finally complete her undergraduate degree. Finishing her capstone class as well as her final honor’s program during the pandemic felt anticlimactic.

“It took so long to finish it,” Khan said. “And then I finished it and I was just like, ‘oh, okay, I’m done.’ And it was weird because I felt like something was missing, something I didn’t do.”

May’s commencement was pushed back multiple times until the official date was set for August, which resulted in Khan not being able to go due to a prior engagement. Not being able to go to her commencement did not upset Khan, but she did feel saddened that she was not able to have the final send-off with the friends that she has made along her four-year journey.

“I know a lot of my friends were disappointed in not having a commencement, but me personally, I didn’t get that closure with my friends,” Khan said. “All of my friends that were in my year, I didn’t get to have the cap and gown pictures with them, or even see a lot of them. We just went on spring break and just left, you know?”

Khan went on to share a specific experience that she was looking forward to that was disrupted by COVID-19.

“One of my friends from high school, we had a graduation picture together in high school and we’re still really close and went to Central together and I just wanted a cap and gown picture with her. It was about my friends and the people I did it with.”

Khan recounts memories with her friends who were there for her, such as one friend who was with her in all the physics labs and complained about chemistry class together.

Another friend she spent studying for her biochemistry exams and another helped her with her anatomy homework. She says doing this degree alone would be impossible for her and having people who support her academically and mentally helped her get her degree.

“I really appreciated the quality friends that I did find,” Khan said. “With a major like this, I am very grateful to find people.”

It was a hard contrast for Khan’s parents who wanted to go to the ceremony. Khan had a wedding to go to in Rochester, New York, so it was impossible to make the schedule work.

Khan’s parents and family did throw her a graduation party to celebrate on their own terms with decorations, gifts and pride. She said it was important for her that her parents showed their pride in her for finishing her degree.

Her parents are still hopeful for Khan’s future commencement, but she does not want to get her hopes up. She understands that there will likely be disappointment as with the uncertainty of the world, she may not get her second graduation ceremony.

“This boils down to safety and priorities and humanity in that sense,” Khan said. “It’s sad and it sucks to even say it like this; I wish it was a different situation.”

Nonetheless, Khan has faith in her university.

“CMU has a duty of responsibility to us, to our families, that they will be responsible. I trust them, I trust CMU,” Khan said.

Khan still has another graduation in the future for medical school. She said her sadness took another form than others who graduated without a traditional ceremony and has a message to them.

“It’s okay to be selfish and it’s okay to be sad,” Khan said. “You’re allowed to be sad and everyone deals with it differently too. For someone who put their blood, sweat, and tears into this, and we all did, sometimes you want that celebration of all that hard work. I get it, it sucks.”

Khan has hopes that when the day of graduation comes around for herself, her sister and her boyfriend, that they all feel proud of how far they have come.

“Be proud of not only getting through it, but who I am at the end of it,” Khan said.