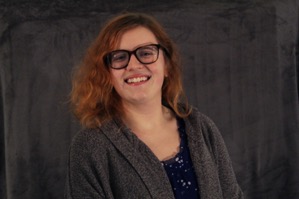 Central Michigan University senior Sara Byks has stood firm in her passion for news broadcasting, journalism and cinematic arts since she was in third grade.

“My friends had a camcorder and they all wanted to be in front of it doing skits,” she laughs. “I always wanted to be playing with the camera.”

She expanded her interest by becoming a student reporter for her high school. Shortly after, Byks took her passion from high school to college when she decided to attend CMU.

“It’s very cliché what I’m about to say,” she says. “But it’s sort of like I walked on campus and it just kind of felt right.”

Byks was taking reporting and broadcasting classes when her roommate stumbled upon a job opening for a student reporter with WCMU Public Radio, a local radio station and NPR affiliate.

Later, Byks’ mentor pushed her to apply to the position and within a couple of weeks, she had the job.

She says writing news stories for WCMU Public Radio has given her the ability to get hands-on experience with local reporting.

“It has been a chance to tell important stories in a way that is really impactful for the community, while also helping me develop my skills,” says Byks.

When asked about the importance of local journalists, Byks emphasizes that getting the facts right in a timely manner has never been more crucial.

“We have such a culture of people sharing and resharing fake news or things that aren’t completely true, so we really need good journalists and good reporters to tell the right story,” she says.

With passionate students like Byks, there’s hope that local journalism isn’t going anywhere anytime soon. She says it’s important for students to be close with the Mount Pleasant community in order to stay informed about what’s going on around them.

“Luckily there’s so many CMU students who are passionate about doing local journalism,” says Byks. “It’s really important to be in touch with your community, because you’re going to get some of the best stories that way.”

Byks urges CMU students to stay up-to-date with what’s going on around them by reading the local and school newspapers or going to local businesses over chain stores.

“Once you find your places in the community, you can do so many more interesting things,” she says. “Some of the best things I’ve done at CMU are events hosted by the Mount Pleasant community.”

When her time is up at CMU, Byks sees herself continuing her career in local news, but she hopes she’ll be in a bigger market, such as Los Angeles, Chicago or New York.

Sara also sees herself merging her passion for news broadcast with her love for cooking by producing her own cooking show later down the line.