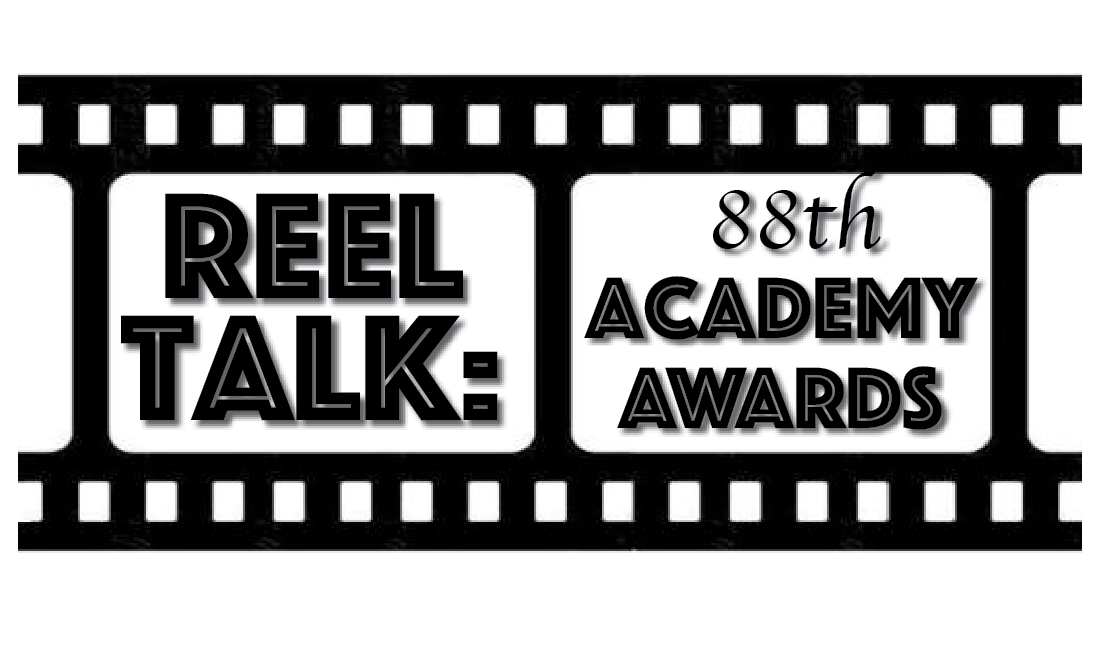 (NOTE: here is a list of the nominees for the 88th Academy Awards.)

Mitchell: Hello again, faithful listeners and readers, and welcome to a special edition of “Reel Talk.” This is Mitchell Kukulka, joined by Kelsey Kolich and Conner Emery, and today we’re going to be sharing with you (and arguing with one another) our opinions about the 88th Academy Awards. Let’s start off with probably the most controversial of today’s topics – Best Actor.

Conner: I think the obvious choice here is DiCaprio. It just pains me. “The Revenant” was a very okay movie – out of all of Leo’s previous best actor noms, this is his weakest role. Personally, I’d love to see Fassbender win for “Steve Jobs.”

Mitchell: I will agree with any sentence that contains both “DiCaprio” and “weakest role.” It’s a shame that this may be the year that DiCaprio and his fans (a demographic which, I’ll say again in case nobody heard me every time I said it before and after today, I am not a part of), finally get what they’ve whined about so long in the form of the Best Actor statue. Let me just say this, it’s a darn shame that performances as subtle as Fassie’s in “Steve Jobs” or as nuanced as what Matt Damon gave us in “The Martian” had to hit screens the same year as Hollywood’s most overrated actor played make-believe in the snow.

I’m not rooting for DiCaprio. I don’t know if I got that across.
Conner: No I don’t believe you did *laughs.* I just didn’t like “The Revenant” that much at all, I don’t have it winning any of the major awards.
Kelsey: I guess I’m a DiCaprio fan because I grew up with him and I’ve seen him grow as an actor. He puts every last bit of himself into his acting. I think he deserves something for that. Especially for the brutal role he cast himself into for a year. He was able to portray vulnerable, but tenacious without the use of dialogue. The film was strong in that way. “The Revenant” proves his versatility as an actor.
Conner: I agree his performance was good. I just feel I would have rather seen him win for “The Wolf of Wall Street” or “What’s Eating Gilbert Grape.” “The Revenant” just strikes me as too much of an “Oscar bait” kind of movie. Based on a true story, long, big name actors and director, etc.
Best Director
Mitchell: As for best director, for me it’s between George Miller for “Mad Max” and Iñárritu for “The Revenant,” and if I were to guess the winner I’d say Iñárritu. I don’t really think “The Revenant” was “Oscar bait” as much as was just a thoroughly well-made movie by a director who’s been great for years and is just now getting the recognition he deserves.
Kelsey: Maybe Iñárritu wanted an Oscar, but I think he put his heart into the film as well and sincerely chose his cast of strong actors.
Conner: It’s well put together. If “The Revenant” walks away with Best Picture, I hope at least George Miller gets best director over Iñárritu. I just don’t want the awards to be dominated by him two years in a row.
Kelsey: Right, he really made a comeback 30 years later to direct another “Mad Max.”
Mitchell: It would be nice to see Miller win, as “Fury Road” is a subversive and exciting as any action movie ever has been. Miller and Iñárritu are really the only directors nominated this year who really show their finesse as artists and filmmakers. Not that any of the other nominees are bad in any way, it’s just nobody could have made “Fury Road” but Miller, and nobody but Iñárritu could’ve dreamt up “The Revenant,” but “Spotlight” and “The Big Short” and “Room” are all comparatively pretty typical from a filmmaking standpoint.
Conner: I think the Academy will give it to Miller because I don’t see “Mad Max” winning in any of the other categories. Despite it being a critical smash hit, it’s not an Oscar movie. It’ll be similar to Heath Ledger winning for “Dark Knight,” but obviously Miller is alive *laughs.*
Mitchell: At a glance “Fury Road” seems like that one movie that shows up at the Oscars every year that sweeps all of the technical awards like Editing and Sound Design without going home with any of the more prestigious awards, though this year I’m blindly optimistic enough to hope that Miller’s talent will at least get him Director.
Conner: Usually I’d say it would be a lock for the technical awards, but “Star Wars” is a thing this year.
Kelsey: They say the key is to predict with your mind and never your heart. As much as my heart wants Iñárritu, my mind says Miller will take the Oscar. As for Iñárritu, I have a soft spot for directors that jump out of the conventional “everything has to be big and flashy and technical.” With use of natural lighting, the authentic bitter cold, limited special effects (bear attack excluded) I love Iñárritu for this. But again my mind says Miller. Likewise, I predict “Mad Max” will sweep the technics categories.
Best Actress
Mitchell: In my opinion, Best Actress is actually going to be a much more interesting race than Best Actor. Instead of there being one clear frontrunner like Leo is for his category, I would say that Brie Larson, Cate Blanchett and Charlotte Rampling each have a pretty good shot at the gold. I’m rooting for Larson, with both my mind and my heart as Kelsey might say it, though the inertia that Blanchett always brings to awards shows can’t be denied.
Conner: It’s funny most people I’ve talked to say that this is Larson’s award no doubt. And after finally seeing “Room,” I agree. Just a great performance. Blanchett wasn’t my favorite part of “Carol,” if Rooney Mara was nominated instead of Best Supporting Actress, she would be my frontrunner. But that’s not the case, so my vote is for Larson.
Mitchell: Rampling, much like the film she’s nominated for “45 Years,” isn’t really given quite enough credit as she deserves because the vast majority of the general audience never saw the movie, but she could definitely be a dark horse in this category.
Conner: I’m always a fan of lesser-known movies winning, we’ll see what happens.

Kelsey: No one really captivated me like Brie Larson. She knew how to make her role grow. I was hoping Jennifer Lawrence would surprise me, but I was rather disappointed by “Joy.”I wouldn’t mind seeing Rampling come out on top. I don’t think she’ll get the credit she deserves this time though.

Best Supporting Actor/Actress
Conner: I am more confident in the supporting actor than any other category. Sly deserves it, “Creed” was one of the best movies I saw in 2015.
Mitchell: Stallone winning after all these years would definitely be a crowd-pleaser, especially since it may be his final bout in the role that made him famous in the first place. However, I don’t think Mark Rylance’s incredibly subtle and incredibly incredible performance in “Bridge of Spies” should be forgotten. It would also be a crime to deny the fact that Tom Hardy more or less carried “The Revenant” acting-wise (though I would probably be alone when saying that).
Conner: I found Hardy bland in “The Revenant” in my opinion. Rylance is great, but he is on track to be getting many potential Oscar roles in the future after his performance in “Bridge of Spies.” Stallone’s got it in the bag in my opinion.
Kelsey: Rylance was incredible indeed. I actually thought Tom Hardy was pretty great at being a scruffy jerk. It definitely carried the story. For Conner’s sake, I hope it’s Stallone.
Mitchell: I would bet money on Rooney Mara and Alicia Vikander being neck-and-neck for Supporting Actress.

Kelsey: I second that. I think these two are both at the top. Alicia was the ultimate supporting role next to Eddie. I would love if she took the Oscar.

Conner: I agree with both nominees. Vikander impressed the hell outta me this year, in both “The Danish Girl” and “Ex Machina.” I wish she was nominated for the latter, and as such I feel Mara is still the favorite.

Mitchell: I’ll never really understand why the Academy extended the number of potential slots for Best Picture nominees from five to as much as 10 (this year there happens to be eight), because every year it always comes down to two or three obvious frontrunners. This year, there’s really no denying that “The Revenant,” “Spotlight” and “Mad Max: Fury Road” are the only films that stand a chance of winning. As much as I would love to see “Fury Road” honored, my money is on Iñárritu taking it home for a second year in a row with “The Revenant,” with “Spotlight” just on its coattails as a possible dark horse.

Conner: “The Revenant” seems like the frontrunner to me, but my heart wants a different nominee. It’s rare that the best movie I saw all year is actually nominated for Best Picture. “Spotlight” is my pick. It’s the best movie about journalism I’ve ever seen, the writing is great, the acting is great. It just all works perfectly. Also, look for Michael Keaton as a dark horse for Best Actor. I feel he should have won last year and the Academy could make up for it this year, and also just to drive DiCaprio truly insane.

Mitchell: I agree that “Spotlight” is fantastic, and, sadly, may end up being swept under the rug and forgotten after Oscar season is finished (which is painfully tragic and ironic given its subject matter). Here’s hoping it will pick up Best Original Screenplay.
Conner: Didn’t even think of that irony. I hope it’ll get whatever it can, although I’m hoping “Inside Out” wins for Screenplay because it melted my cold heart.
Kelsey: I think the Academy will ultimately go with “The Revenant.” They could also very well be influenced by the outstanding cinematics of “Mad Max.” “Spotlight” has a lot of hype, and it told an exceptional story but I was not fan, I hate to say.
Closing Words
Conner: In closing, just for the heck of it, what was everyone’s favorite movie of 2015?
Kelsey: “Ex Machina!” Have you guys seen “The End of the Tour?” That was another one I loved.

Mitchell: I agree with Kelsey on “The End of the Tour.” “Steve Jobs” and “Beasts of No Nation” would be my picks for Official Best Films of 2015, and both were robbed. “Beasts” in general, and “Steve Jobs” for not getting nominated for the Best Adapted Screenplay that it should have absolutely stolen. “The Look of Silence” was also fantastic, so hopefully it steals Best Documentary Feature.

Conner: “The End of the Tour” was crazy good! I didn’t think anyone else had seen it. The fact “Beasts of No Nation” wasn’t nominated at all is a matter of the Academy not coming to terms with Netflix and other streaming-companies producing movies, that’ll change in the next few years. For me “Spotlight” was the best movie I saw this past year. And I’m going to be judged for this, but a close second was “Straight Outta Compton.” Best music biopic I’ve ever seen.
Mitchell: I also second “Straight Outta Compton,” and recommend “Love & Mercy,” another great musical biopic.
Kelsey: Well, that wraps up this installment of “Reel Talk.” Thanks everybody!