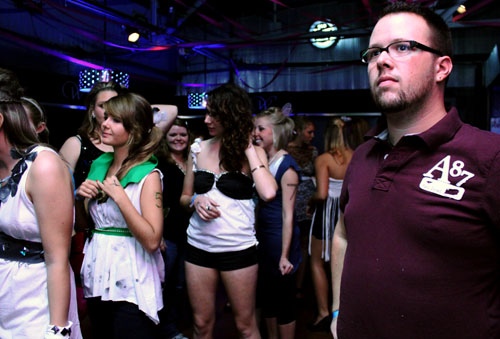 Threads participants and Fashion Association of Merchandising and Design members had an hour-and-a-half to hand-sew and create a garment out of one shirt, one yard of fabric and various supplies for a runway show in an effort to raise money to get Seth Aaaron Henderson, season seven winner of Project Runway, to come to Central Michigan University in the spring.

The designing took place in a private section of the bar while members and guests could choose to dance or watch the designers complete their garments.

The showdown started at 10:30 p.m. with each designer drawing a shirt and random accessory from a bag to incorporate into their design.

“I knew what to expect, but I was pretty nervous about the surprises that they had for us,” Agnello said. “It challenged us to be more creative.”

Agnello’s inspiration came from nature and reminded her of the line she designed for the 2010 Threads Fashion Show.

“I wanted to use a lot of movement,” Agnello said. “It was my style.”

First year designer, Caitlin Andrews, an apparel merchandising and design junior,  became nervous when she watched her fellow designers pull shirts and accessories from each bag.

“You weren’t sure of what you would get,” Andrews said.

She pulled a white V-neck T-shirt and a red velvet bow. 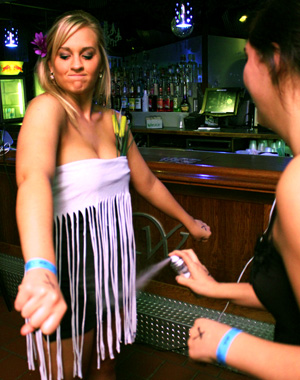 Andrews executed her “elegant” look by adding silver fabric, the red velvet bow, jewels and sparkle to her design.

At midnight the designing was completed. The models walked and danced in a cage and onto the stage to Beyonce’s “Single Ladies” and showed off each designer’s creations.

Marlina Issa, an apparel merchandising freshman came to support her friend and watch the fashion show. Issa said it was nice to see all the designers and their work.

As a freshman, it made her excited to be an apparel major because she said she would like to participate in the pre-show one day.

Once the runway show was over, designers and their models participated in a money war and tried to raise the most money and votes for their outfits.

From what has been counted so far, the pre-show has raised more than $1,000, Threads producer, Jason Gagnon said.

The top three winners from the pre-show will be posted on the Threads board on the first floor of Wightman Hall on Oct. 25.