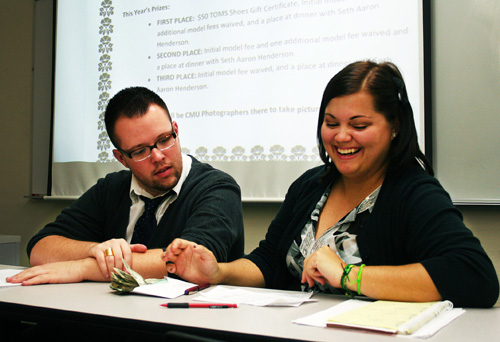 Student designers could not believe the theme of the Central Michigan University Threads 2011 fashion show.

Co-producers Alissa Berriman, an apparel design second-year senior, and Jason Gagnon, an apparel merchandising and design junior, wanted to come up with the most ridiculous and outrageous idea.

Gagnon told the designers at the first Threads meeting about their “jungle party” theme. Designs were to be created by combining two different animals for inspiration.

He said the inspiration for his line came from combining a peacock and a giraffe.

Gagnon said he had never had so many people glare at him in his life, but the theme was a hoax.

“We wanted to start the year out with a laugh,” Gagnon said. “We really wanted to freak people out.”

The producers decided to have no theme in this year’s show to promote “ultimate creativity.” They are excited about the changes that Threads is undergoing for the fashion show which will be held in Finch Field House on April 16.

The show will be broken up into spring/summer, fall/winter and resort wear. They wanted the show to focus on student designers’ inspiration, passion and ambition.

The producers also felt by not having a theme it would give students a better idea of how professional runway shows run.

“We are bringing a real fashion show to Central,” Gagnon said.

Currently, Threads is trying to create a fundraiser to get Seth Aaron Henderson, season seven winner of Project Runway, to come talk to students for Central’s first fashion week. The producers are excited to develop the week of events, known as their “fashion baby.”

Threads’ biggest fundraiser of the year is the Threads pre-show, which is on Oct. 20 at Wayside Central, 2000 S. Mission St. Doors will open at 9 p.m.

The first 100 people who attend will have a chance to win a $25 gift card from TOMS Shoes. Also, Komplique swimwear will be attending to scout student models.

The show will have 10 to 15 designers creating a garment from scratch to send down the runway. Each designer will be provided a 3XL men’s T-shirt and will draw an additional random accessory from a bag to apply to their garments.

Designers can bring one yard of additional fabric and sewing supplies.

Each designer gets an hour-and-a-half to hand sew and create a garment for his or her model. Designing starts at 10:30 p.m. and the runway show starts at midnight.

The first place winner will receive $45 of fees waived for the fashion show, a $50 gift card for TOMS Shoes, and dinner with Henderson.

The voting will be based on a money war. The designer who makes the most money from the audience will win.

Last year designers were able to raise $464 in coins and cash.

Both Berriman and Gagnon encourage students to come out for the pre-show to support Central student designers and have an awesome time.

“We want to make Wednesday the new Thursday,” Gagnon said.