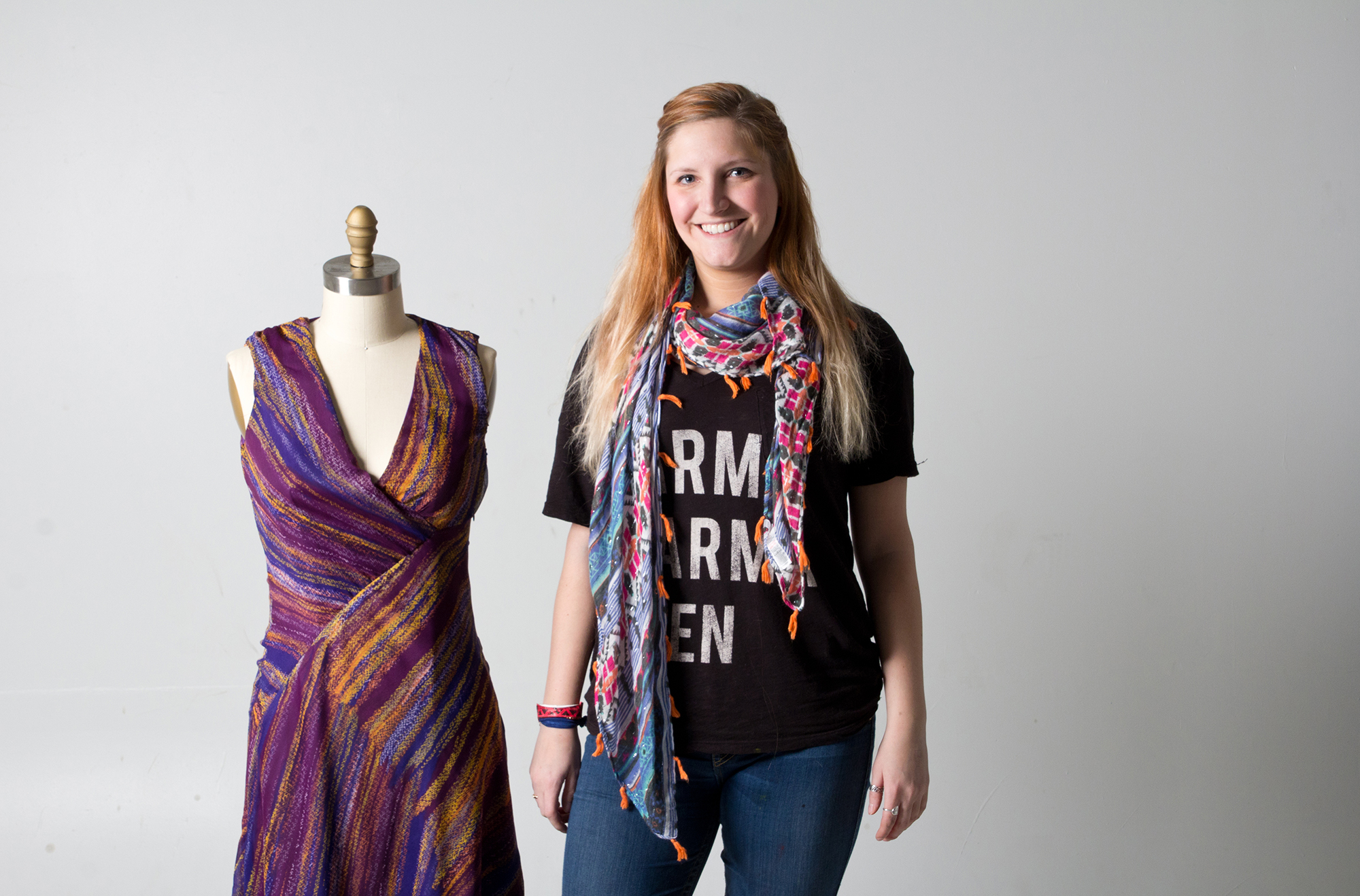 Threads designer Malorie Urda, whose accomplishments include a collection in last year’s Threads fashion show, a summer internship with  Haute Hippie and a double concentrate in apparel merchandising and design, is a down-to-earth girl with big ambitions and an even bigger sense of style.

With her unwavering dedication and indie-chic aesthetic, she was inspired to base this year’s Threads collection off of the rock and roll classic movie “Almost Famous.”

What is your design process like? How did you land on that particular aspect of the movie?
I pretty much knew what movie I was going to do the minute they announced the theme, because “Almost Famous” is my favorite movie and the design aesthetic is very similar to mine,which makes it also easier to design for me. I pretty much just watched the movie 10 times, did a lot of sketching and a lot of note taking. I was in New York (last) summer so I went to Mood and I bought my fabrics before I even knew what I wanted to do, and so now I have fabrics laid out and I’ve just been thinking about what I want to do. I do have one garment done—from my draping class—a really cool purple dress with a feather design.

What is your biggest draw to the rock-chic style?
Oh gosh, I think my biggest draw is my personal style. I’ve always shopped at places like Urban Outfitters and then my mom would tell me I look grungy but then she would be like “I like it though, I think its really cool” and I just continued with that. I don’t like girly things, and I don’t like preppy things, so that’s what I latched onto, and it’s what I can get in Michigan.

Who is the girl you’re designing for?
I like to picture Kate Hudson (from the movie) in everything, because she is just so awesome. I don’t want to say groupie, because they weren’t even groupies but just a girl that’s really free spirited and likes to live in the past a little. Girls that want to rebel a little bit.

Is there anything other than “Almost Famous” that has really taken root in this collection, or inspired you?
Yeah, I worked for the company Haute Hippie over the summer in NYC, and lots of their stuff is very bohemian and rocker—they called it robo—that stuff really inspired me, they make a lot of great stuff with leather and fur and really cool fabrics. And then going to Mood inspired me, they have amazing fabrics.

What are you looking forward to the most in Threads?
I’m looking forward to having a really complete collection that goes together and tells a story. Last year my pieces were very similar and they were cool, but they didn’t tell as much of a story as I wanted them to. Of course, I’m excited for my friends and family to come up as well. It’s always so awesome to get feedback from them because a lot of them aren’t really sure what I’m doing up here.

What are you most nervous about?
Time frames. I did this last year, too. I start really late; we kind of all do. I’m nervous to just get everything done and just have it look the way I want it to. I have such strong visions and I’m afraid if it doesn’t turn out, I will be bummed, but I’m pretty confident.

Where do you see yourself going in fashion?
I’m applying right now, which is so stressful, but I’m either thinking back to NYC from some cool company, like Haute Hippie maybe, or totally the opposite, maybe California? Doing yoga wear, which is my other love. Even lululemon if I could go to Canada.

Any do’s or don’ts for readers?
Do wear whatever you like. Be quirky, I think it’s just whatever, it tells a story about you, and that’s cool. Don’ts? I don’t have a lot of those. Everything I would say I do myself. I guess don’t let people tell you what to wear, even if it’s UGG boots.

Anything you else you want to add?
Go to Threads! It’s going to be awesome.