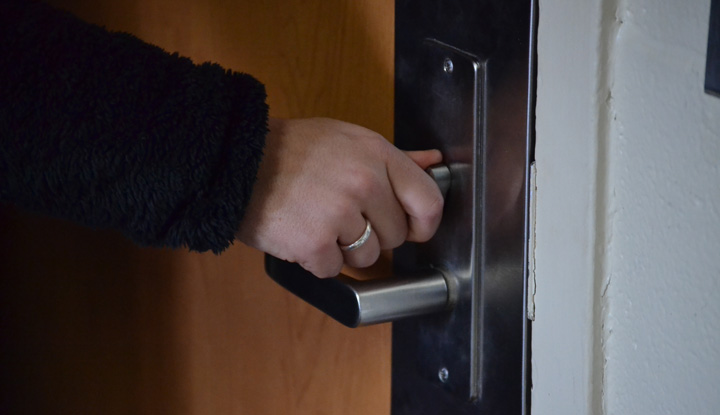 By Kayla Schultz and Tifini Kamara

An email released Oct. 28 advising students to “lock doors even when occupied,” following an early morning on-campus sexual assault, angered students perceiving the email as insensitive and poorly timed, while others ignored the email thinking it was general safety information.

Reactions to the headline of the email

Meaning to serve as a cautionary reminder, the email was sent to students on behalf of the Central Michigan University Police Department by University Communications the day after 18-year-old John Rubio was arrested for home invasion, criminal sexual conduct with intent of sexual penetration, criminal sexual conduct in the 4th degree and two counts of assault and battery. The incident took place in Merrill Hall.

“A better headline might have been ‘Suspect arrested after sexual assault in residence hall,’” said Mark Ranzenberger, Central Michigan University lecturer of journalism.

According to a copy and pasted version of an email sent from Central Michigan University Police Chief Bill Yeagley to Director of Public Relations Steve Smith obtained by Grand Central Magazine, the information was not sent to students immediately because it was not an immediate threat.

Why the email was sent the day after the incident

The email said: “Since there was no danger (…suspect was arrested promptly) we didn’t feel the need to put this out immediately (yesterday). However, we feel there is still the obligation to fulfill the requirement [Clery Policy].”

The “Clery Policy” Yeagley mentions is the Jeanne Clery Act that requires campuses to publish and distribute crime statistics and campus security policies yearly. The act also requires the campus community to be notified when dangerous situations arise.

Section I (J)(i) states that there should be policies that include procedures to “immediately notify the campus community upon the confirmation of a significant emergency or dangerous situation involving an immediate threat to the health or safety of students or staff occurring on campus, as defined in paragraph (6), unless issuing a notification will compromise efforts to contain the emergency.”

Criticism after the email was largely directed to the Central Michigan police while no reports questioned University Communications’ involvement or how both departments liaise between each other.

“I’m disappointed,” said Yeagley. “It was my message that went out and it wasn’t a good one.”

Yeagley stated that his administrative team comprised of Chief Bill Yeagley, Capt. Fred Harris, Lt. Cameron Wassman and Lt. Larry Klaus work on the emails that are sent to University Communications in the event of a crime.

“University Communications is involved in disseminating approximately 200 campus missives each year,” Smith said. “The process for each communication varies depending on the message, the audience and who the message originates from.”

Yeagley did not state whether or not he wrote the initial email, but responded saying “one of us or all of us [work on these messages],” with “us” being the police department’s administrative team.

He told GCMag that in the Merrill Hall case he “participated.”

In an attempt to understand why the email created controversy and how to avoid it in the future, Yeagley has been in communication with Student Government Association President Marie Reimers.

“I’ve been in constant contact with Chief Yeagley. We’ve been emailing back and forth about language,” Reimers said. “He emails me when he would like my input.”

Reimers said she believes the email was written in “police speak” and that the message was not intended to be portrayed the way some read it, as blaming the victim.

University Communications’ involvement in the email

The way the police department, University Communications and all other departments use language and transfer information affects the image of not only the university, but the students, faculty and staff.

Some say that they did not succeed.

“In the case of the Merrill Hall communication, it was written by CMU Police and disseminated by our office. We edit to AP Style, grammar corrections, etc., but don’t alter content,” Smith said via email.

Grand Central Magazine received the original email sent from the police department to University Communications and though minor changes were made, there is no semblance of Associated Press style, a commonly utilized guideline journalists and public relations specialists use.

“The headline on the email was so innocuous,” said Ranzenberger. “I also have a problem with the fact that the incident happened early Sunday morning, yet CMU police and University Communications were silent about it until late Monday morning.

“There was a rapist lurking in a student’s room and it took more than 24 hours to tell anyone about it? Come on. This should have been out Sunday afternoon.”

On the morning of Nov. 5 two officers from the Central police department were invited to a 500-level public relations class at Moore Hall. They provided insight into standard information gathering for crisis communication, one of them using the recent sexual assault as an example.

The officer who used the example is a member of the police department’s administrative team though he did not disclose it to the class.

He told students that they got their “butts kicked” because of the email. He also alleged that it was University Communications who wrote the headline, changed the message and made it emphasize that dorm residents need to lock their doors.

This conflicts with Yeagley’s stance that University Communications does not change messages, although he did state that the police department does not write headlines.

When asked why the officer from his administrative team would shift blame to University Communications and he stated that he did not know.

Smith said that he did write the headline for the email that was sent to the campus community about the Merrill Hall incident.

“My reasoning was that the immediate threat was past and the suspect was in custody so a remainder to lock doors seemed appropriate,” Smith said. “Unlocked doors are the number one cause of crimes on campus.”

The inconsistencies of both the Central police department and University Communications regarding the Merrill Hall communication could be a sign of a flawed system.

Even with a revision in the system, it seems that University Communications is not responsible for content the Central police department sends, even if it questions the sensitivity of the message such as the Merrill Hall communication.

“I believe one critical role of a PR department in an organization is to offer counseling and problem solving at high levels, not just the dissemination of information after a decision has been made,” said Assistant Professor of Public Relations Dr. Ren Chunbo. “My personal story is that when I worked in Weber Shandwick Beijing, even though my U.S. client gave me the materials to use in dissemination, we needed to closely review and suggest client to revise if there was sensitive or controversial information for local market.”

The original and edited version of the email

The original email sent between the police department and University Communications, given to Grand Central Magazine by both parties is as follows:

During the early morning hours of Sunday, October 27th, 2013, a subject entered an unlocked residence hall room in Merrill Hall.  The subject committed a sexual assault (touching) and other simple assaults in the room.

Students are reminded to keep their residence hall room doors locked–even when occupied or overnight.  Everyone is also encouraged to report any criminal activity or suspicious behavior to the CMU Police Department by calling 911, or 774-3081.

The email sent to students, faculty and staff is as follows:

During the early morning hours of Sunday, October 27th, a subject entered an unlocked residence hall room in Merrill Hall. The subject committed sexual assault and other simple assaults.

Students are reminded to keep their residence hall room doors locked–even when occupied. Everyone is also encouraged to report any criminal activity or suspicious behavior to the CMU Police Department by calling 911, or 774-3081.