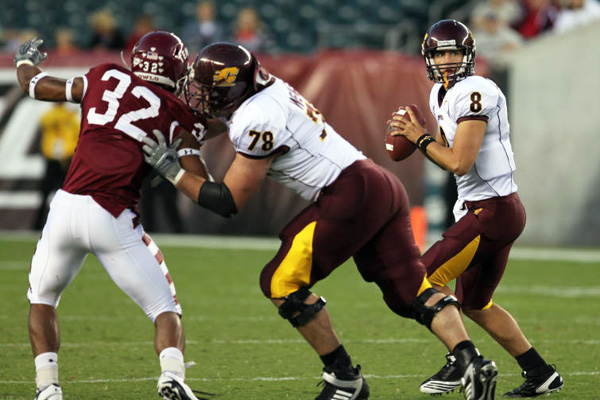 As the horn blows on a rainy afternoon ending another practice, it is not quite the same feeling in the air as a normal Wednesday practice.

Game day is right around the corner and all of the questions and doubts that rattle through a student athlete’s mind of why they put their bodies through this year-round torture are answered.

After two and a half months of winter workouts, seven conditioning days at 6 a.m. in February and March, 15 spring practices, three months of summer lifting at conditioning and three weeks of training camp, game day is here.

Sprinkle in just a one-week break here-and-there and it’s easy to see why this game isn’t for everybody.

An old coach of mine used to say, “If it was easy, everyone would do it.”

All of these endless hours clocked-in, not for an endless baseball season or 30 basketball games along with a conference tournament–but for just 12 opportunities to play arguably the greatest team sport. Every week means that much more when there are so few chances to prove you belong.

To prove that the LeFevour-less Chips are still a team to be reckoned with.

To prove that an offense losing its 1-2 punch of Bryan Anderson and Antonio Brown can still move up-and-down the field at will.

To prove that a defensive line losing its pass-rush specialists Frank Zombo, Sam Williams, and Larry Knight proving it can still give opposing quarterbacks nightmares.

And to prove that the often ridiculed secondary losing four seniors from the previous season is hungry with a desire to attack anything set in flight with an opposing schools logo on it.

With so much to prove, there is no time for complacency and even less time to dream of last year’s successes.

When we departed for the hotel campus was buzzing and that feeling was in the air. Seniors tell freshman how crazy the next day will be. The next time we step out of those hotel doors, the air will be filled with sounds of dense traffic and music from the tailgate lot.

All of the meetings and meals in the hotel seem never ending as anticipation for the game builds. By Thursday morning no one can stand still and the 7 p.m. kickoff feels far away.

The pregame meal, a quick highlight tape, a pep talk and we are on our way to Kelly/Shorts to kick-off the 2010 football season.

Last touches of eye black are added, ankles are taped and heavy metal music rings throughout the locker room while we get ready to take on Hampton.

We got off to a slow start but momentum worked in our favor as our play got faster and we got stronger as the game went on. The coaches were happy overall with our performance, but as always there is room for improvement.

Twenty-four hours to feel happy about ourselves and then it’s on to the next work week to prepare for the pre-season MAC favorite, Temple Owls.

Throughout the week we prepare for an all-out physical battle with the team that boasts a size advantage up-front and a preseason Heisman Trophy candidate running back.

All week coaches push us to the breaking point, challenging us each to do our part and give one-hundred percent effort from the starting horn of practice until the final whistle.

Traveling to Philadelphia and playing in Lincoln Financial Field home of the Eagles, is something that I’ll never forget because I am a huge Donovan McNabb fan. I remember watching the ex-Eagle quarterback in years past in NFC Championship games and some of the miracle plays he has made on that very grass.

The massive stadium with the beautiful skyline in the backdrop provides the stage for a clash between the defending MAC champions against the preseason favorite to win the conference.

At pregame meal the silence in the room speaks volumes as it is the calm before an imminent storm. Each team sits in its final team meetings before the game, fully believing they are the better team but as we all know, everyone can say they are better but eventually you have to strap on the helmets and play the game.

“I don’t want you guys walking around like you are depressed,” head coach Dan Enos said. “Keep your heads up. It’s not the end of the world and we still have all of our season goals intact to be accomplished.”

It’s a painful loss in a game that we believe was very winnable without the small mistakes that we made throughout the game defensively and offensively.

“We beat ourselves tonight,” defensive coordinator Joe Tumpkin said in reaction to the game.

The hour and a half flight delay gave us ample time to reflect on the loss and begin the process of moving on. It will give us some valuable learning experience that will only make us harder to beat in the future but make the chip on our team’s shoulders that much bigger.

Twenty-four hours to celebrate wins and to be mad about a tough loss. Then it is on to the next one.

Next stop is in Ypsilanti to take on the pesky Eagles of Eastern Michigan in a rivalry game. The Chips will be ready to bounce back.