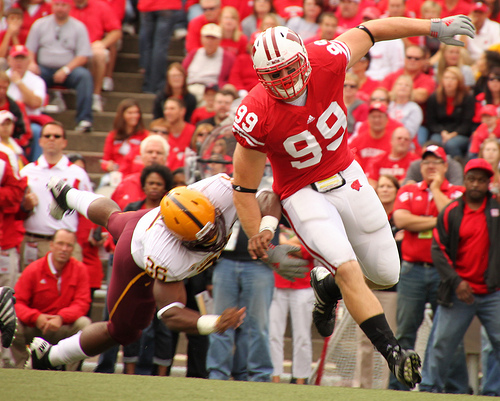 The National Football league is hosting its 76th annual draft from Radio City Music Hall in New York City and of course will be featured in primetime on ESPN.

This draft is overtaking the shadows of the collective bargaining agreement between the league and its defunct players’ association. The lockout is lifted as of now but as we all know anything can and will happen when dealing with billionaires and millionaires duking it out. It’s time to forget about the legal issues for the next three days as we sit back and watch this nation’s favorite meeting.

The Carolina Panthers are on the clock with the first overall selection after their miserable 2010-11 campaign after going 2-14.

The experts are convinced that the Panthers should select Heisman winner and Auburn quarterback Cam Newton. Newton is a 6″5 250 lb. quarterback known for his ability to make plays on his legs and with his arm.

I would like to state my case as to why the Panthers should look elsewhere with their first overall pick. Newton has many questions surrounding his personality and his game. Newton is somewhat of a selfish player who holds onto the ball for far too long in the pocket. Sure he can run around and power his way forward for yardage but this is the NFL and defenses in the league will feast on a quarterback who sits and waits forever to make a decision. Newton’s talent is undeniable and he is a physical specimen unlike any other quarterback in the draft.

My main problem with the Panthers taking Newton is the fact that this draft is loaded with potential defensive superstars. Defense is the foundation for growing into a contender and the Panthers already have a somewhat strong defense barring a couple of holes that could be filled by players like Von Miller (OLB, Texas A&M), Patrick Peterson (CB, LSU) and Marcell Dareus (DT, Alabama). If you put Von Miller next to Jon Beason in the Panthers defense then I believe this team could have one of the best linebacking cores in the league two or three years down the road.

Who am I kidding though? The Panthers believe a quarterback is the solution to their problems and it’s the pick that the fans want to see. It’s a shame because the teams behind the Panthers are drooling at the magnificent pieces left for them to pick from.

Michigan’s own Detroit Lions are sitting at pick 13 in the pecking order. The Lions have some needs all over the place. Most notably at cornerback, linebacker and offensive tackle. The Lions have maintained that they will select the best available player when it is their time, excluding the quarterback position.

Last year the Lions selected Ndamukong Suh with the second overall pick last year and the defense  as well as the team improved by leaps and bounds on their way to a 6-10 record, including a four-game winning streak to close the season.

The pre-draft consensus is that the Lions will select Prince Amukamara cornerback from Nebraska. This would be a great pick for Detroit as it fills a glaring hole and the fact that Prince could be the best available player at the 13 spot.

My only warning to the Lions is this. J.J. Watt, Da’Quan Bowers and Nick Fairley. Yes, these three men are all defensive lineman, which is Detroit’s strongest and most improved position group. These three players are also game-breakers with non-stop motors and freakishly athletic attributes. J.J. Watt has a 35-inch plus vertical and this guy never takes a play off. Take a long hard look at J.J. Watt, Detroit. Put this guy on your defensive line and the opposing quarterbacks won’t even have time to take advantage of your less than stellar secondary  and you’ll have one of the better defenses in the league for years to come.

You can catch the draft on ESPN, first round on Thursday night at 8 p.m., second-third round on Friday at 6 p.m. and the final four rounds on Saturday at noon.

Check gcmag.org for live coverage of the draft’s first round.