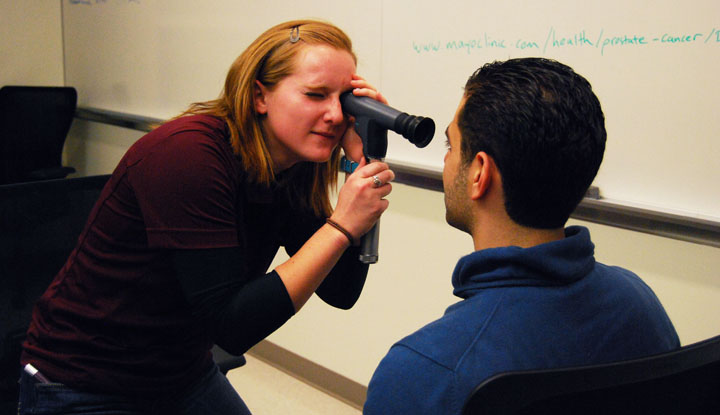 When first approaching this article, it was assumed that men still dominate the medical field like they have in the past. Full preparation was made to fill this page with facts about Central Michigan University’s College of Medicine classes being filled with men, facts about how women lingered in the shadows of the medical community waiting for their chance to be taken seriously, but that assumption was wrong.

After the first five minutes with medical student Trista Osantoski, it was clear that CMed is not the picture painted in many people’s head. In fact, it is the complete opposite.

“Our class specifically is more females than males. The medical field as a whole is becoming more balanced,” Osantoski said.

According to Central Michigan’s Office of Institutional Research, 58 percent of the inaugural class is female. This is the highest percentage out of all Michigan medical schools.

Although the gender difference seems to be making the class dynamic more reserved than Osantoski’s male-dominated undergraduate courses, everyone seems to have an equal part in discussions.

Not only are the students made up of more females but the faculty is as well.

“Our professors also appear to be more female to male. I would say 60 percent female, 40 percent male,” Osantoski said.

This gap makes no difference in the quality of the learning classroom.

The Association of American Medical Colleges says men made up 70 percent of the medical community in 2010 but residencies showed an even split. This means the medical profession will drastically change in the next few years when these doctors finish their residencies.

The gender gap may be closing in the medical profession as a whole, but inconsistencies will show up when it’s broken down into specialties. Women dominate pediatrics, geriatric medicine and family practices but are significantly absent in surgery and critical care.

Society in the United States expects women more than men to have to balance work and family and tend to see them as the nurturing sex.

“It’s a little easier for [males] because they don’t have those previous misconceptions. Women have a fine line to walk between nurturing and being competent,” Osantoski said.

Women in medicine have come a long way. There are still specialties that are unbalanced but the medical profession as a whole is continuing to close the gender gap.

At CMed, this change is evident. Of course there are majors on campus that attract more females than males but those trends can change. CMed isn’t a male dominated school and like the rest of the medical community, women are finally making their mark.