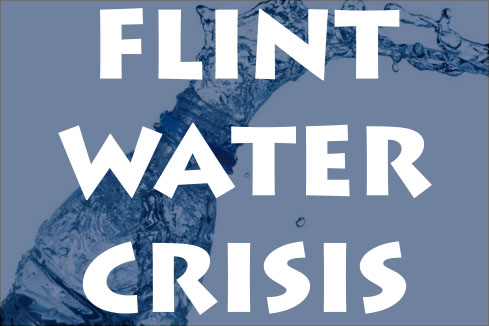 Water is a necessity that most people don’t think about not having. It provides for the daily activities of brushing teeth, taking a shower, cooking or just drinking.

In Flint, Mich., however, the drinking water is contaminating families in the community.

The contamination stems from the decision to pull water from the Flint River instead of the treated Lake Huron. It has been discovered the water was contaminated with lead, leading to a serious public health danger for everyone that had come in contact with it.

When exposed to lead, many health problems can arise. Lead poisoning can affect people in several different ways, including rashes, developmental delays and slowed growth. If exposure is prolonged, the effects are potentially life threatening.

As a result of the contamination, Governor Rick Snyder has declared a state of emergency and around 100,000 residents are left without clean water.

Central Michigan University students are alarmed by what is happening and are stepping forward to help the city of Flint during their time of need.

Sophomore Audrianna Gruesbeck from Ithaca and her sorority, Delta Phi Epsilon, have paired with fraternity Phi Delta Theta to raise money and collect water bottles to deliver to the residents of Flint.

“Most people are constantly searching of ways that they can make a positive impact on their community,” Gruesbeck said. “We know that as people, we need to be taken care of and supported by our friends, families and neighbors. What better way than to help the people who live not even two hours away from our own front door?”

Gruesbeck and her organization knew this crisis was a time where they had to help those who desperately needed it.

“I have a mix of emotions when I think about the people in Flint,” Gruesbeck said. “I feel absolutely, gut-wrenching awful that thousands of people are having to suffer from this tragedy. I also feel frustrated about something like this can actually happen.”

Gruesbeck has realized water is something that most people take for granted, and she has learned to appreciate the things she is lucky to have, especially something as simple as water.

“I live in Grand Blanc, which is only a five minute drive from downtown Flint. I visit Flint almost every day when I am back at home. When I first heard of the crisis, I immediately thought of my best friend’s grandfather who lives on Miller Rd. He still today showers in the water,” Trombley said. “I still have friends and family that live in the city, so this is so weird. It’s so scary knowing that people I love and a place where I consider a home is going through such a terrible thing.”

From someone who is so close to the city, Trombley hates to see the place she loves going through such a terrible time. Trombley said she would love to help get involved and help Flint in any way possible.

“It is frustrating that this could have all been avoided,” Trombley said. “Flint and the citizens of Flint were not treated with the respect and consideration they deserve.”

Trombley is hoping that students can help by donating or at least spreading the word to raise awareness about the situation.

“So many of our student population comes from the Flint area,” Trombley said. “Michigan is our home – when one city goes through such a terrible crisis we should try every possible thing to help out. It is great to see students helping already, but I know there is more we can do being such a big community.”

Gruesbeck has been inspired by her organization and the CMU community to make the world a little better than it was before. She hopes that the whole CMU community will step forward and try to help the city of Flint because any little bit counts.

“I hope to see our fellow Chippewas get involved with this plan of action,” Gruesbeck said. “If everyone donated even just one bottle of water, it would be over 27,000 bottles of water to help the people in Flint.  This is how impacts are made.”

To donate water or to find a way to help the city of Flint, students or organizations can contact the Red Cross of Flint or visit helpforflint.com to find ways to volunteer.