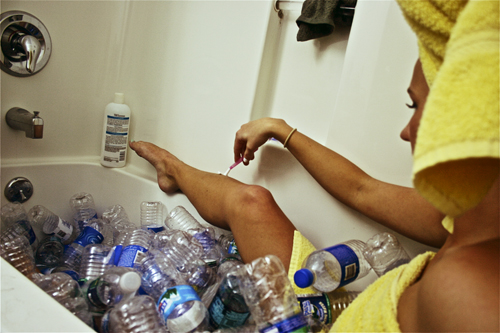 At the start of the fall semester, Take Back the Tap was a new registered student organization with plans to try to end the sale of bottled water on campus. The president, Samantha Schleich, wanted to take the issue to the Student Government Association, or SGA, for a vote at the beginning of November.

However, it’s now the end of the semester, the SGA has already met for the last time this year and Take Back the Tap has yet to write up legislation needed to call for a vote. Even if SGA votes to ban the sale of bottled water, it doesn’t mean that the university has to comply. Although the SGA considers itself “chief line of communication between students and the CMU administration,” in the past it has not always made a large impact on campus.

The answer is no. Perhaps Take Back the Tap’s initial goals were a bit lofty, but that doesn’t mean the group should not continue the path it’s on. Even if Central never bans bottled water, raising student awareness about reasons to not use bottled water is just as important. According to Schleich, student’s perceptions on bottled water have already changed because of Take Back the Tap’s presence on campus. The group has had more than 500 signatures from students, staff and faculty on their petitions to ban the sale of bottled water.

“We have changed the minds of hundreds of students regarding their choice to not drink bottled water or purchase it on campus,” Schleich said.

Schleich now hopes that SGA will take action on the issue by the end of spring semester. When they do present it to SGA, it will be to a sympathetic audience. SGA President Brittany Mouzourakis, an international business studies major, considers herself an environmentalist.

“We would be excited to work with them and get behind the cause,” she said.

According to Mouzourakis, when the SGA backs up a cause, it’s taken seriously, and she cites the changes that the SGA helped make in healthcare for international students on campus as an example.

“SGA’s name behind a cause means a lot more than it did in the past,” she said.

Mouzourakis said that if Take Back the Tap worked with an SGA senator to create legislation which would then be presented to the SGA, the SGA would vote on whether or not it agreed to ban bottled water on campus. If SGA voted in favor of the ban, the first step would be to talk to Campus Dining.

Although Campus Dining claims it is committed to sustainable practices, it has no plans to discontinue offering bottled water to students. According to Nikki Smith, marketing manager for Campus Dining, this is because it is still “a popular demand from our customers for the sake of convenience and sanitation.” As Take Back the Tap continues to raise awareness, this demand may go down, making it easier for Campus Dining to end the sale.

Campus Dining has discussed ways to reduce the use of bottled water on campus. On the Campus Dining website, it states that “we advocate and employ energy and water management efforts to reduce consumption, preserve scarce resources, and reduce our contribution to greenhouse gas emissions and water shortages.” If this is true, then they should support the efforts to ban the sale of bottled water.

Despite potential support from SGA and Campus Dining, it’s highly likely that bottled water won’t be banned on campus anytime soon. It’s also likely that Schleich, who founded the club and is a senior this year, will graduate before Take Back the Tap achieves its ultimate goal. However, other members of the group aren’t worried.

“Sam has laid down such a great foundation, I don’t plan on stopping the fight,” group member Christopher Corrigan, a sophomore majoring in environmental studies and outdoor recreation, said. “The organization will continue after she leaves.”