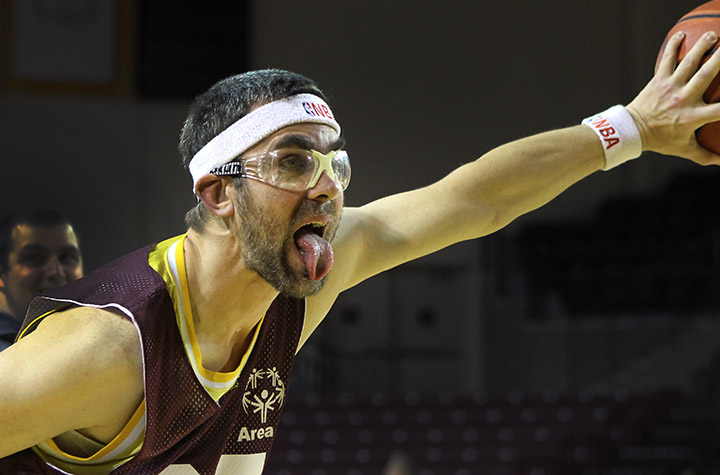 For the first time in Central Michigan University’s intramural sports history, student athletes as well as Special Olympics Michigan athletes joined together to compete in a unified basketball tournament.

Instead of students putting their own teams together, the players had to take part in an assessment day for this event.

Junior and student-athlete Austin Peters said everyone’s skill level is tested for the teams to be evened out.

Peters was a member of the team Birds of War, which he describes as a great experience.

“It’s been really cool,” Peters said. “You really get to know all of the athletes and they all want to know you. They are all really funny. Everyone likes talking trash too, so that’s a plus.”

Junior and Birds of War team member Garrett Brooks said he felt lucky to be a part of a team who bonded well and had good group camaraderie.

Brooks said he learned the importance of teamwork and that the Special Olympic athletes are just people like everyone else.

“We grew a lot as a team and personally as well,” Brooks said. “Playing with special Olympic athletes definitely transforms you as a person.”’

Special Olympic Michigan athlete Don Abbott has made many new friendships with his teammates.

“I just love playing,” Abbott said. “I play forward and I get all of the rebounds.”

Brooks calls Abbott the “rebound king.” Abbott also received the Defensive MVP award for the season on Birds of War.

“The most rewarding part of this experience is everyone’s attitude,” Peters said. “Everyone is very positive and gets along. They aren’t always in it just to win. It’s a great experience and helps you grow as a person as well. Your relationships just keep growing each time you see each other.”

Along with rewards come challenges as well. Peters and Brooks said the challenge for them was realizing it’s not all about winning for unified basketball, even though they are very competitive at heart.

“We’re all here to have fun more than anything else,” Peters said. “I’ve learned to be more happy and positive. I sometimes come and am not that excited to be here, but then I see my teammates and they are all jacked to see me, so it makes me be happy. I become less tense and strung up on having to be the best and winning.”

For Peters, being able to unite with Special Olympic athletes makes him feel more a part of the community.

Birds of War ended up in the Silver Match championship game and won that division.

While Abbott plans to come back next year and keep his defensive MVP title, Brooks is hoping to come back and coach their team next year.

“We had a great team and I’m happy with the way things turned out,” Brooks said. “We are going to come back with a vengeance next year and win.”