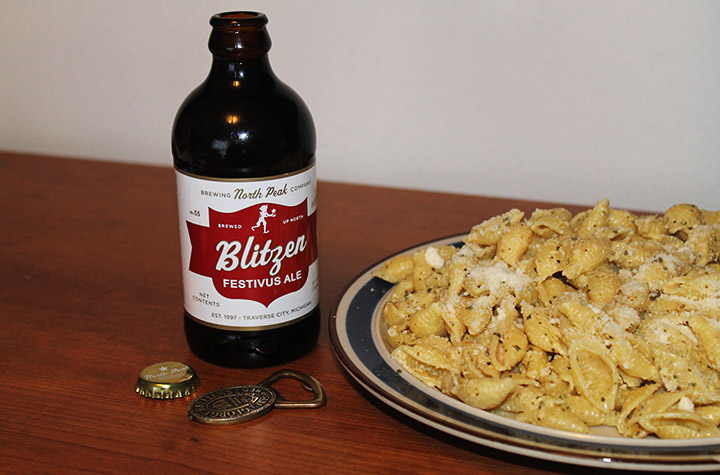 Holidays, for the most part, don’t mean anything to me. I’m unfazed by Christmas, St. Patrick’s Day, Thanksgiving and all the others. Naturally, I catch a lot of flak for this, from both my family and my friends, who all call me names — “Scrooge” being the most common — and who can’t for the life of them, understand why I’m just so damned boring.

I propose though, it’s not me who is boring. It’s the holidays that are boring. They’re supposed to be special, but it’s their very occurrence year after year that makes them every bit as routine as waking up in the morning. Just as I don’t make a big deal of rolling out of bed at the scream of my alarm, I can’t see the point of jumping up and down in anticipation for something that sits on the same calendar day every year, and that we’ve had in our heads since childhood what to expect from it. Bad Christmas? See you next year.

North Peak Brewing Company out of Traverse City has engineered a little bottle of irony that delights me precisely because of my apathy toward the things I’ve been told all my life to find festive. The bottle design is the same of Red Stripe. Short and cylindrical, the size of the top hole is disproportionate to the size of the body, and the thing looks like it could just as easily hold cough medicine.

Blitzen is, of course, one of Santa’s many steeds, who being forced to pull a sleigh containing a sack supposedly holding enough presents for all the children of the world, always seemed to have the raw end of the deal. That they were all imbued with magical powers made me feel no less sorry for them, especially since I have good evidence to believe that the carrots my parents left out for the reindeer on Christmas Eve never actually made it down their gullets.

One look at Santa and any person with even a tiny bit of common sense will know that he selfishly inhales everything left on the plate as tribute for the presents he leaves, and I was always surprised he never ate the chimney bricks on his way out.

Luckily for Blitzen, the celebration of this particular beer is Festivus, a made-up holiday (but aren’t all holidays made-up?) that entered the public consciousness through Seinfeld, a relic of the 90s that, even some 20 years later, has lost none of its charm. What exactly is a Festivus Ale? I can’t figure it out.

When I popped the cap and took a gulp of it, I expected to taste something light and sweet. I closed my throat too, because I half expected to swallow a piece of glass that had broken when a Christmas ornament probably fell into the brewer’s vat. Instead, what confronted me was dark and bitter.

At first, I was put off, and then I realized that this too is part of the joke: just as Festivus is a protest against Christmas’ consumerism, this beer is a rearing against our conception of what a holiday should be, and the brewers were nice enough to let Blitzen in on the joke. Festivus always starts with the Airing of Grievances. Against this beer, I have none.